The words Climate Emergency seem to be reverberating in everyone’s ears. It’s on social media, it’s frequently been the headlines of newspapers, magazines and online forums, and if you have been in the CBD at all this year, you are likely to have found yourself in bumper to bumper traffic whilst hundreds of thousands of brave students have walked in the sweltering heat with home made signs above their heads.

What Is A Climate Emergency?

So far, the United Kingdom, France, Canada (just to name a few) have made a parliamentary declaration that we are in a Climate Emergency. This means that they recognise global warming’s existence, and the need for further strategies to address the crisis. But, is a Climate Emergency an actual term, or merely a symbolic label?

When we think of emergencies, we think of bushfires, floods, earthquakes and volcano eruptions-it’s easy to do so because we can easily assess their damage and witness their impact on human lives. Unfortunately, because Climate Change does not appear to have such a burning presence, many have chosen to ignore its impact on our lives, and on future generations.

Michael Eburn from the Australian National University explains that the words Climate Emergency are a “statement, so that one jurisdiction can say to the Commonwealth ‘look, this is really important.'”

Eburn’s comments raise an important point, that its label is a powerful agent for change because it brings society’s attention to an issue that needs complex, significant solutions. With the current state of Australian territory, Climate Emergency is perhaps the only appropriate term for the catastrophic bushfires that have ravaged Australian lands and lives.

What Do Australians Have To Say About The Emergency?

This year, a multitude of rallies have called for our Australian Government to accept that we are having a Climate Emergency. There have been large scale ones, like the Greta Thunberg led Strike 4 Climate Action, which occurred in September and had over 300’000 attendees, and ones on a smaller scale, like last week’s New South Wales is Burning, Sydney is Choking.

The rallies have been an attempt to raise society’s awareness about our current climate crisis and to urge our governments to take action on the issue. The strike saw many students from a variety of schools and institutions, the University of Sydney sent this email to its cohort: 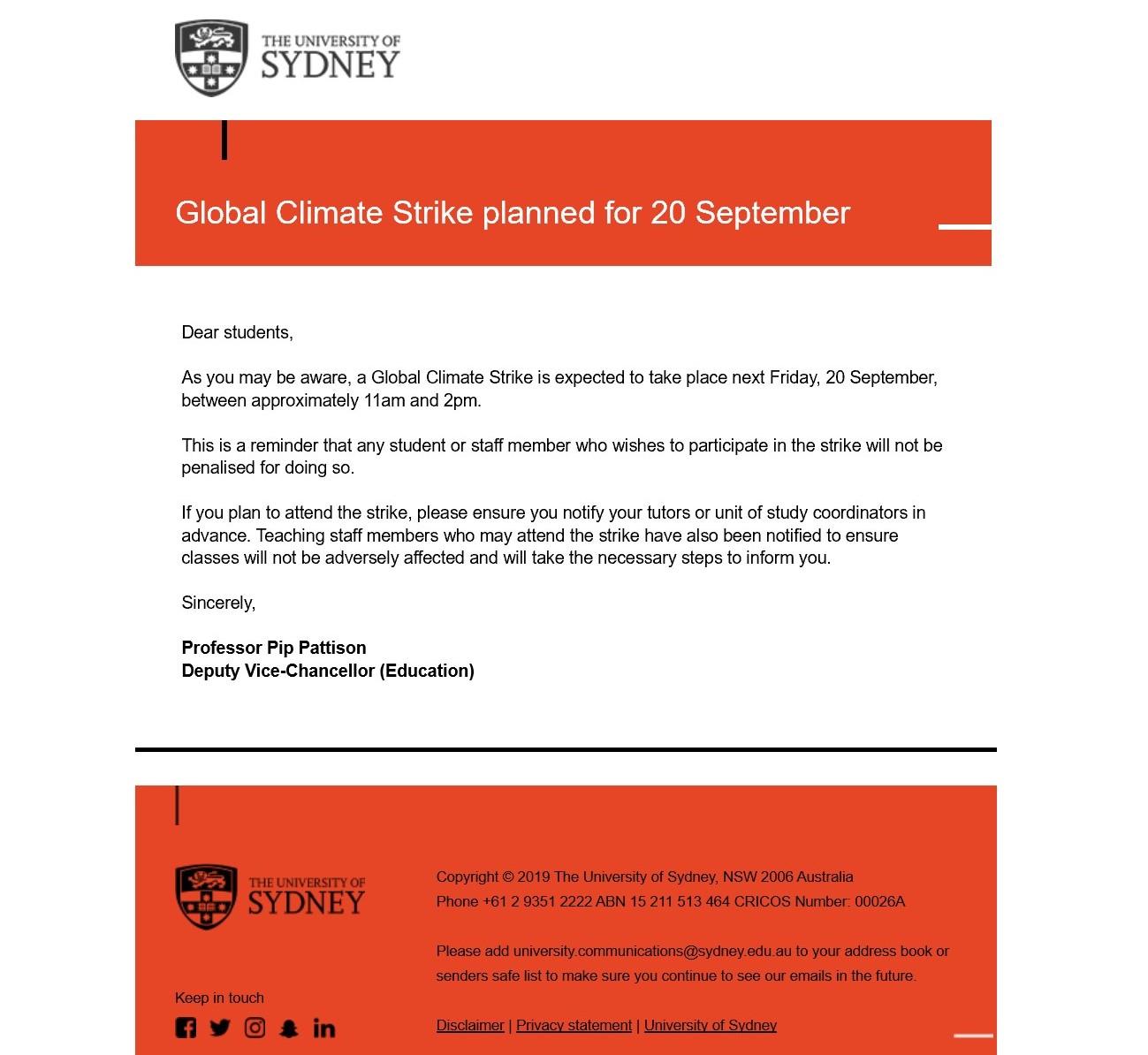 Whilst many praised the students for taking an active, pertinent response to the Climate Crisis, Scott Morrison notably stated that he “wanted more learning in schools and less activism.” Morrison’s message was loud and clear, he wanted students to ensure that they focused on education and being successful for the future.

What this fails to account for is that education is not merely grades and memorisation of facts, education is about preparing students to be happy, healthy, active and informed citizens-the goal of any good teacher. Schools are a place of learning, learning about one’s identity, their place in the world, how they can change their world and how they can beneficially impact the lives of others. Actively taking a role in an issue students feel strongly about is doing just that.

On a separate note, the very activism that the Prime Minister is shaming is done by students fighting for their right to any future at all. The Prime Minister fails to recognise that he is asking students to study for a future that may be eradicated by the climate changes he refuses to acknowledge.

Ironically of course, is that Morrison’s insistence that students should be in school didn’t acknowledge how the catastrophic bushfires (which have been possibly made worse by his government’s lack of appropriate action) have resulted in the closure of over 600 schools in the last few weeks. This begs the question, if Morrison is so concerned about their ‘education,’ why hasn’t he addressed the issue of its accessibility for students in bushfire affected areas, or students who are concerned for their families and friends?

It isn’t just students who are calling on Morrison’s government to do more. Greg Mullins, the former commisioner for NSW Fire and Rescue, and the founder of Emergency Leaders of Climate Action declared that:

“if the Prime Minister really wants to restore calm, then he needs to step up and show leadership.” He explained that “on Monday, 22 health and medical groups called on the Federal and NSW Governments to respond to the public health emergency created by the ongoing air pollution from bushfire smoke.”

So far, twenty six Australian Local Governments have declared a “climate emergency.” In November, after Sydney Lord Mayor Clover Moore ackowledged the climate emergency, she stated that “70 percent of global emissions are generated by cities, so the actions of city governments are critical.”

The penultimate questions are: what are Morrison’s government’s plans? Why is he ignoring the hundreds of thousands of people calling upon him to address the climate crisis?

Perhaps this is because denying the significance of the climate crisis is an easier, safer route for conservatives in politics than acknowledging the truth. Morrison’s main strategy seems to be an insistent claim that “Australia is doing our bit on climate change and we reject any suggestion to the contrary.”

Of course, this comes without any mention of what our government’s plans for addressing the crisis are, and is humourlessly comical when 2019 has had the hottest June, July, August, September, October and November ever recorded in Australia.

Another answer to these questions can be a fear of history repeating itself. It is important to note that Morrison’s leadership in the Liberal Government came after the removal of Malcom Turnbull in 2018. Turnbull’s demise was incited by his support of emissions trading and his attempt to instigate an Energy Policy (which would have tried to reduce emissions whilst securing Australia’s energy market). So Morrison may be trying to take a different approach and pander to his party by making minimal or repudiating statements of the climate crisis’s impact on Australia.

At the moment, conservatives are aware of the spectacle and are afraid of giving it the attention it deserves (more funding would be a start, so that NSW Volunteer Firefighters don’t have to crowdfund so they can buy their own face masks) because that means they have to address the crisis themselves. An issue they have continued to pretend isn’t having the detrimental impact that it actually is.

By ignoring Australia’s smoke signals, the government is failing our country.

What did you think of the 2019 Climate Emergency Rally? Let us know in the comments down below.