Hi I’m Paul Roberts welcome to my PODCAST Channel “THE FUTURE” where I cover BREAKING TRENDS FROM AROUND THE WORLD.

In our ever accelerating times, keeping ahead of the latest breaking news and trends from the world’s of fashion, music, film, art, tech, activism, is a time consuming daily challenge ? Sure the information is all out there, but it is a time consuming ordeal to scan all the necessary sources. As Darwin said survival depends on how quickly you can adapt.

In today’s PODCAST FIB’s Trend Report #99, I am going to look at one of the dark sides of Instagram and Influencer culture. And I call it “TOURIST-ATION”, and yes it’s my invented moniker, a hybridisation of ‘Tourism and Devastation’.

That was Leo DiCaprio as Richard in his post Titanic film role “The Beach” directed by Danny Boyle.

In the film, Richard says;

“Trust me, it’s paradise. This is where the hungry come to feed. For mine is a generation that’s circles the globe searching for something we haven’t tried before. So never refuse an invitation, never resist the unfamiliar, never fail to be polite and never outstay the welcome. Just keep your mind and suck in the experience. And if it hurts, it’s probably worth it.”

Richard’s monologue is kind of a rallying cry for Instagram obsessed Millennials all over the world.  And whilst the movie was released way before Instagram arrived and was something of a sleeper, or dud depending on your view on the 2nd half of the movie, what it did manage to do was set an irreversible chain reaction of over tourism or what I call “Tourist–ation” that literally destroyed the idyllic Maya Bay and the Islands known as Koh Phi Phi Thailand.

As someone who travelled to Koh Phi Phi many year before the film, this story has a special kind of relevance to me. When I went there with my girlfriend, there was only a couple of bamboo huts and virtually no tourists. I had later read the Alex Garland book of the same name. So I knew what to expect, and the film adaptation is pretty good until it loses the plot about the half way mark with hallucinations and gangsters.

Leonardo DiCaprio plays Richard, a 20-something, white, random American who goes to Thailand in search of a new kind of kick, to find a possibly dangerous new adventure. He drinks Cobra blood and parties his way through Bangkok, and hears rumours about a mythical secret Island and beach.

A destination that is not on any maps and is the stuff of legend. So he and a young French couple set off to find the Beach with the help of a secret map obtained from Daffy (Robert Carlisle) his dead roommate.

When Richard and his traveler friends find the pristine island, the commune living there in secret grant them permission to stay under the strict condition that they’ll keep their beach a secret, so as to not ruin their idyllic lives with interlopers. While on a supply run to a nearby island Richard, of course, breaks their trust and tells some others about the island and the map, leading to a mess of lies, deaths, and the demise of their “perfect” community.

And so  ’The Beach’ gave us a clear warning about the worst of Influencer Culture, that was soon to follow. Instead of secret maps we now have Geotags and Instagram posts.

The Beach’s message has picked up new resonance in the age of influencer culture. The controversy around The Beach and its local environmental effects only served to foreshadow a common theme in the news today; not only did the film depict the corruption of a little-known Thai paradise, but it also led to the real-life destruction of the beach where it was filmed, and over the past few years, as content-hunters and “digital nomads” have taken over our feeds, a similar situation has played out globally in destinations that were once unspoiled.

Through the lens of 2020, DiCaprio’s Richard would be just another Instagram influencer in Thailand, living with little regard for the lives of locals and wreaking havoc on remote locations as he takes in experiences for the sake of aspirational “adventure”, the perfect Instagram ‘selfie’ and episodes for his Vlog channel on YouTube.

You can almost hear the soundtrack intro to Richard’s Vlog;

“Trust me, it’s paradise. This is where the hungry come to feed. For mine is a generation that’s circles the globe searching for something we haven’t tried before.”

In the time when The Beach was set, he just didn’t have a cell phone to capture and post his every move for attention.

To make the location more Hollywood idyllic for the lens, and with permission from the Thai government, The Beach film crew worked to change the Maya Bay landscape without consultation by environmentalists or locals who relied on the area for tourism.

After The Beach finished filming, the ecological effects of the changes they had made to the natural environment were far more damaging that anyone anticipated.  A lot of the natural flora surrounding the beach was cleared to make the shots more open and appealing, and without the bushes, the sand eroded after a series of storms. Plants from the area were relocated, but soon died anyway, as did the sea coral. It was a disaster, but more trouble was soon to come.

Despite the movie’s lukewarm critical reception, its portrayal of the beautiful beach caused a boom in tourism. When I went there, you would be lucky to see 2 or 3 boats arriving but for the next 18 years, more than 300 boats carried 5,000 tourists into Maya Bay each day, according to the South China Morning Post.

The constant swarms of tourists and power boats killed reefs and fish and scared off the local birds. The result; a completely dead ecosystem.

Uncanny as it may be, that destructive flux of tourism is almost exactly what The Beach cautioned against. In March 2018, after close to two decades of damage, Thailand’s National Parks and Wildlife Department announced that it would close Maya Bay to tourists for four months every year in order to bring back balance to the island’s coral reefs and marine life.

As of December 2019, Thailand had extended its closure for two more years. Once conservationists rebuilt coral gardens in the bay, animal life including sharks, fish, and birds began to return. ”

‘Tourist–ation’ in Maya Bay may have predated social media, but in the age of travel Vlogs and Geotags, a similar story is playing out across the world.

While a DiCaprio flick might have been needed to spur big travel buzz in the early 00s, anyone on Instagram or YouTube can now serve as #goals. Social media expedites the problem, prompting huge amounts of interest in destinations that aren’t prepared for an onslaught of tourism.

After decades of disarray caused by careless tourists, the Philippines temporarily closed the major beach destination of Boracay in 2018.

And now there are even Websites dedicated to showing the Most Instagrammable locations for ‘Selfies’ and Vlogs. Creating even more logjams and bottlenecks as thousands of Instagrammers line up to take the same image. It’s really gotten crazy. 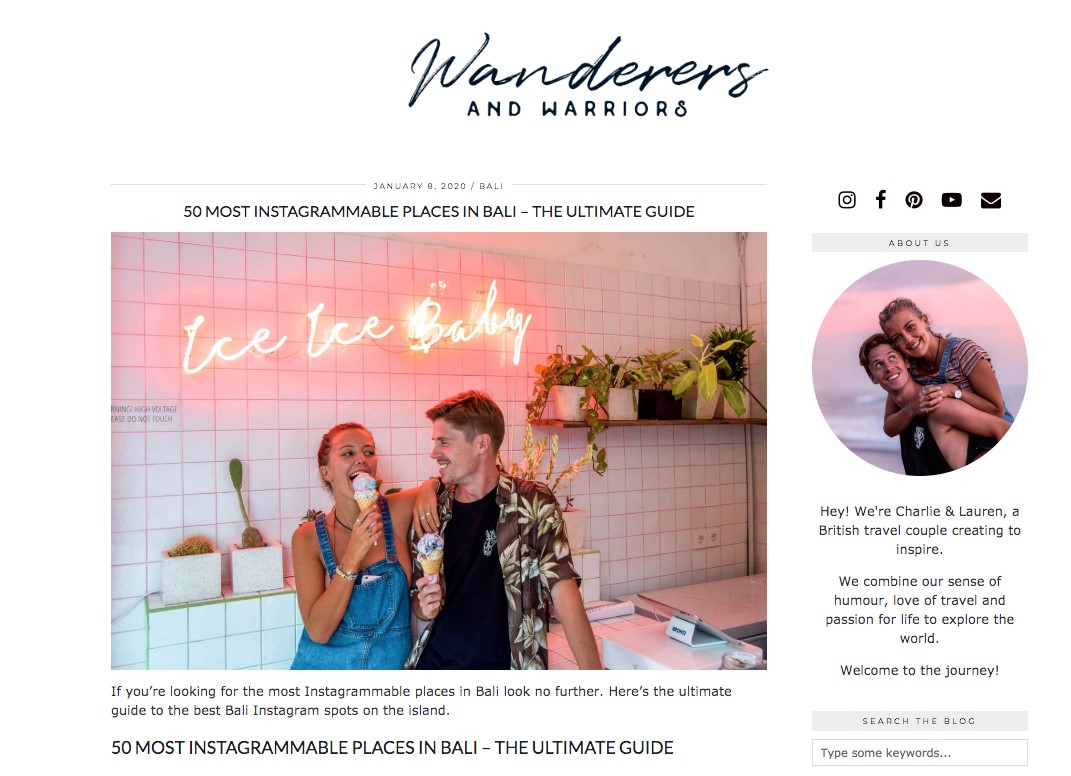 Last year, the Indonesian government considered banning tourists from Komodo Island in an attempt to conserve Komodo dragon populations, and Instagrammers were blamed for damaging the wildlife at California’s Antelope Valley California Poppy Reserve by veering off-trail for the perfect shot.

It’s no surprise that publications from Travel + Leisure to Conde Nast Traveler to the New York Times have questioned whether the Geotag and the Instagram travel photo may be ruining the world’s natural wonders.

Since 2018, the ‘Leave No Trace Centre for Outdoor Ethics’ has listed social media best practices for the outdoors, and in the modern version of the locals’ plea to Richard in the beach, some destinations now ask that visitors refrain from geotagging locations.

“If outdoor enthusiasts stop and think about the potential impacts and associated consequences of a particular action, it can go a long way towards ensuring protection of our shared outdoor spaces. To that end, we encourage outdoor enthusiasts to stop and think about their actions and the potential consequences of posting pictures, GPS data, detailed maps, etc. to social media. Furthermore, we urge people to think about both the protection and sustainability of the resource and the visitors who come after them.”

Twenty years later, most people might not remember The Beach or think of Maya Bay as anything more than a fleeting Instagram ‘Selfie’ opportunity. For locals, however, The Beach’s effects are only now beginning to fade. Perhaps the most horrifying and the most memorable thing about the movie is how much it still speaks to our own capacity to take a beautiful thing and completely destroy it.

Which is one very palpable example of the dark side of Influencer Instagram culture. Culture what a laugh, LOL !

Does Instagram actually contribute a net positive to humanity or is it another Zuckerberg case of technology out of control?

FIB Trend Reports: Breaking News From Around The World

If you want to want to know where your world is headed first subscribe to the FIB Platinum Curated Content Membership.

Custom designed for knowledge workers and creatives, our unique TIB curated Content Platinum Membership, puts the latest popular culture, news, and trend breakdowns directly into your hands each week, faster than your competition has time to discover them.

So you can hear first, act first, profit first.