As fashion month draws to an end, we head to the streets of Paris where fashion provocateurs can showcase their collections on the backdrop of French romance and artistry.

The Coronavirus has wreaked havoc on many shows during the course of AW2020, with cancellations from designers, fashion elites, and audiences alike. With people in surgical masks filing the streets of Paris, the Louvre temporarily closed, and the cancelation of Seoul Fashion Week that typically followed Paris; it’s no doubt that many were uneasy about the success of Paris Fashion Week.

Nonetheless, our favourite designers impressed yet again with their stunning collections and creative showcases. Particularly Kanye West, who brought an interesting twist to fashion week with his Yeezy season 8 show and Balenciaga’s apocalyptic runway.

The collections presented at Paris Fashion Week Fall/Winter 2020 embodied the essence of bold romanticism, with many designers flexing their ability to utilise different fabrics, prints, cuts, and silhouettes for any fashion moment; the catwalk, the office, or a glamourous night out in Paree.

THE WEIRD AND THE INTERESTING

Two rabbits, a fox, a horse, two cows, and a crocodile were the main talk of the Stella McCartney show this fashion week. That is, people in life sized animal costumes, of course. The animal costumed models joined the other models on the runway while showing off the latest collection of handbags from the designer brand. McCartney said that the message behind this comical spectacle was simple, while many animals usually make their way to the runway- they’re usually worn and not alive. In other words, McCartney hoped to spread a message about cruelty-free fashion.

Coats in twill Melton wool, with tie belts and high collars in a design that merged utility with chicness dazzled on the runway. As did knitwear, which is another McCartney collection staple.

North West rapping forced Nicki, Megan, Cardi and Doja into early retirement with "WHAT ARE THOSE?!?" pic.twitter.com/kXYwjXCRl5

We all know Kanye West is not a fan of the ordinary, so the unexpected was to be expected for his Paris Fashion Week show. Starting off his time at fashion week by blessing his show with an invite-only Sunday Service in Paris, then carrying the essence of exclusivity through to the showing of his collection for Yeezy Season 8; of which was also strictly invite-only.

The showcase was strange, to say the least. Held at the Espace Neimeyer, guests stood on a slippery, glass hill with some wrapped in felt blankets that were handed to them upon entrance. Against a backdrop of pure silence, models began walking the runway in crop-tops, puffer coats, and wide-legged pants. Then, the loud and urgent sound of cars honking and other awful traffic noises filled the speakers as a soundtrack for the show.

If you thought the surprises were over at this point, you’d be wrong. Wests’ daughter, North West, then emerged and started rapping while the models took their final walk. West emerged to give his daughter a cuddle, then stood beside her beaming while she completed her performance.

@balenciaga …The sky blazed, the sea boiled, the planet had one serene moment to catch its breath…and then TOTAL ECLIPSE. Is @demnagvasalia fashion’s Cassandra or fashion’s Chicken Little? THE SKY IS FALLING. Believe it.

Balenciaga decided to flood their Parisian runway in an apocalyptic fashion, with models flashing through an inch of water in either water socks or stiletto heels in an effort to make a statement about climate change. Creative director, Demna Gvasalia, said that the decision was made as a nod to rising sea levels and evident consequences of global warming. Inferno skies also added to the ominous essence of the show, as did the garments that were branded with exaggerated villain-like shoulder pads.

The first two rows of seats were also plagued with running water, so many fashionable attendees opted to sit in the third row. Balenciaga is reportedly recycling all water used in the showcase. 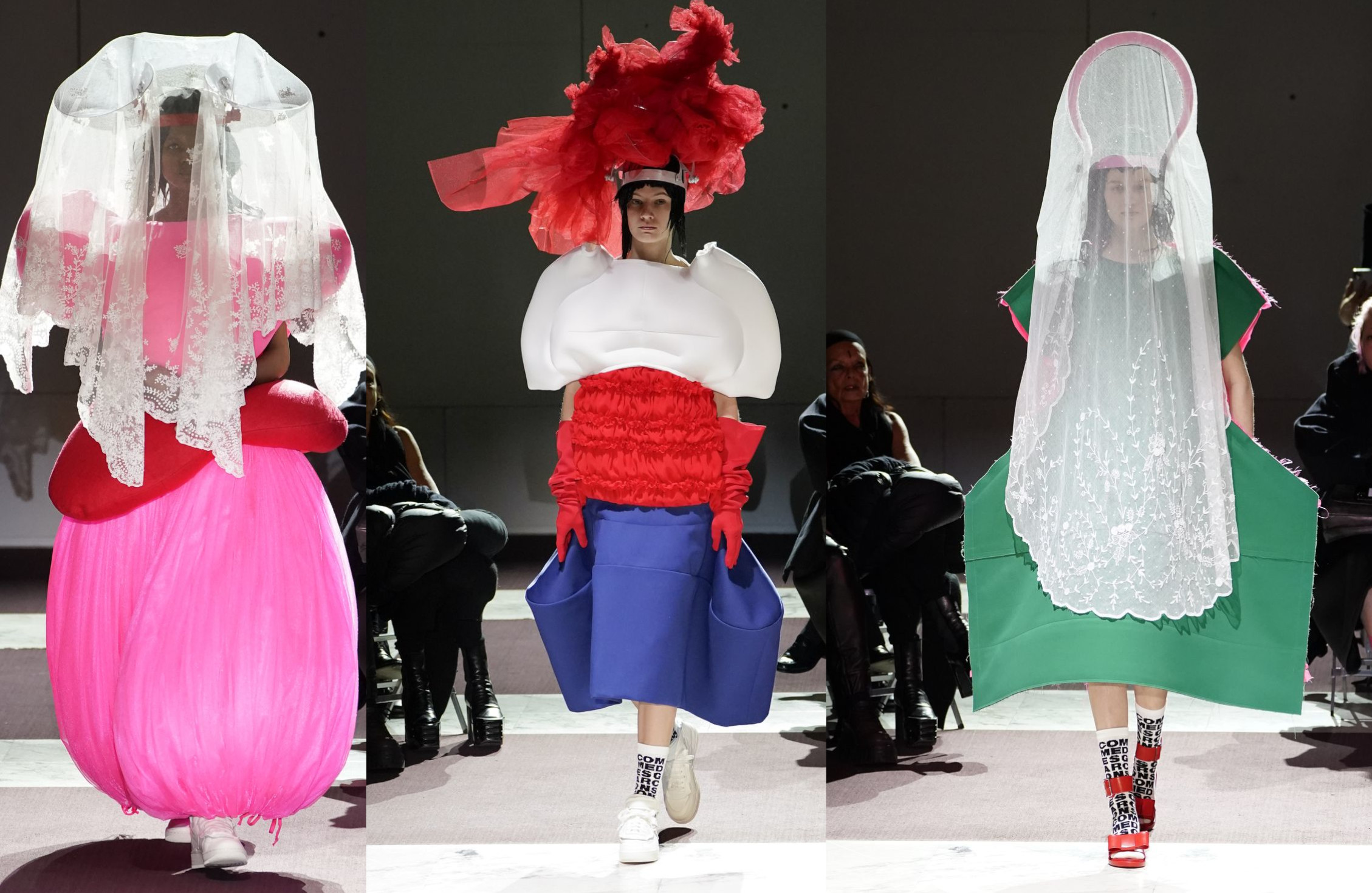 Comme des Garçons collection this season was no exception to the dreamlike designs that encompass the brand’s essence. Dance, art, fashion, and obscure designs were all features of the Paris showcase as models walked the runway to a different soundtrack per lool. Rei Kawakubo’s designs defied gravity once more, with large scale headpieces and grand veils.

The collection also seemed to experiment with bubble skirts, tops and silhouettes 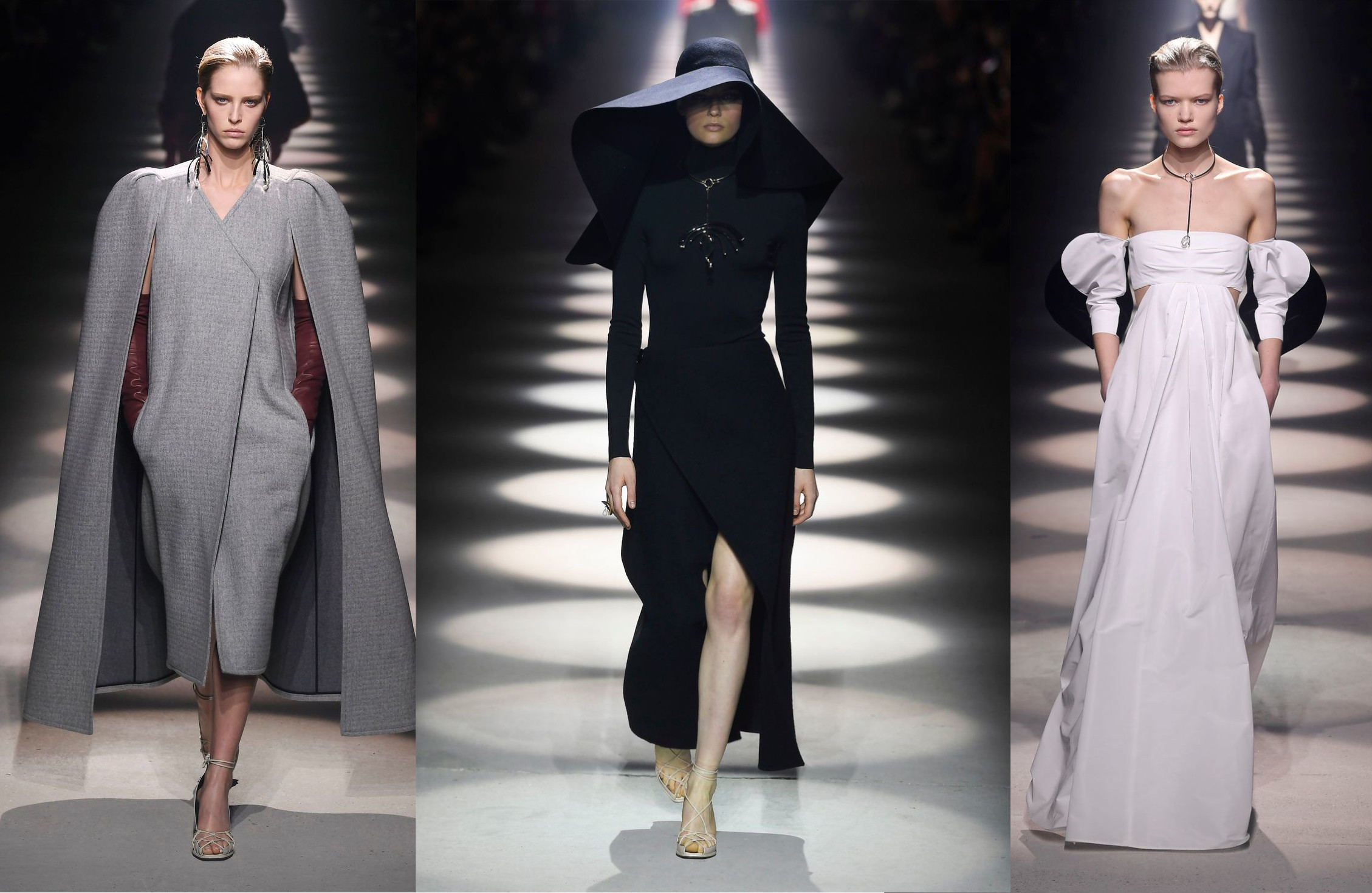 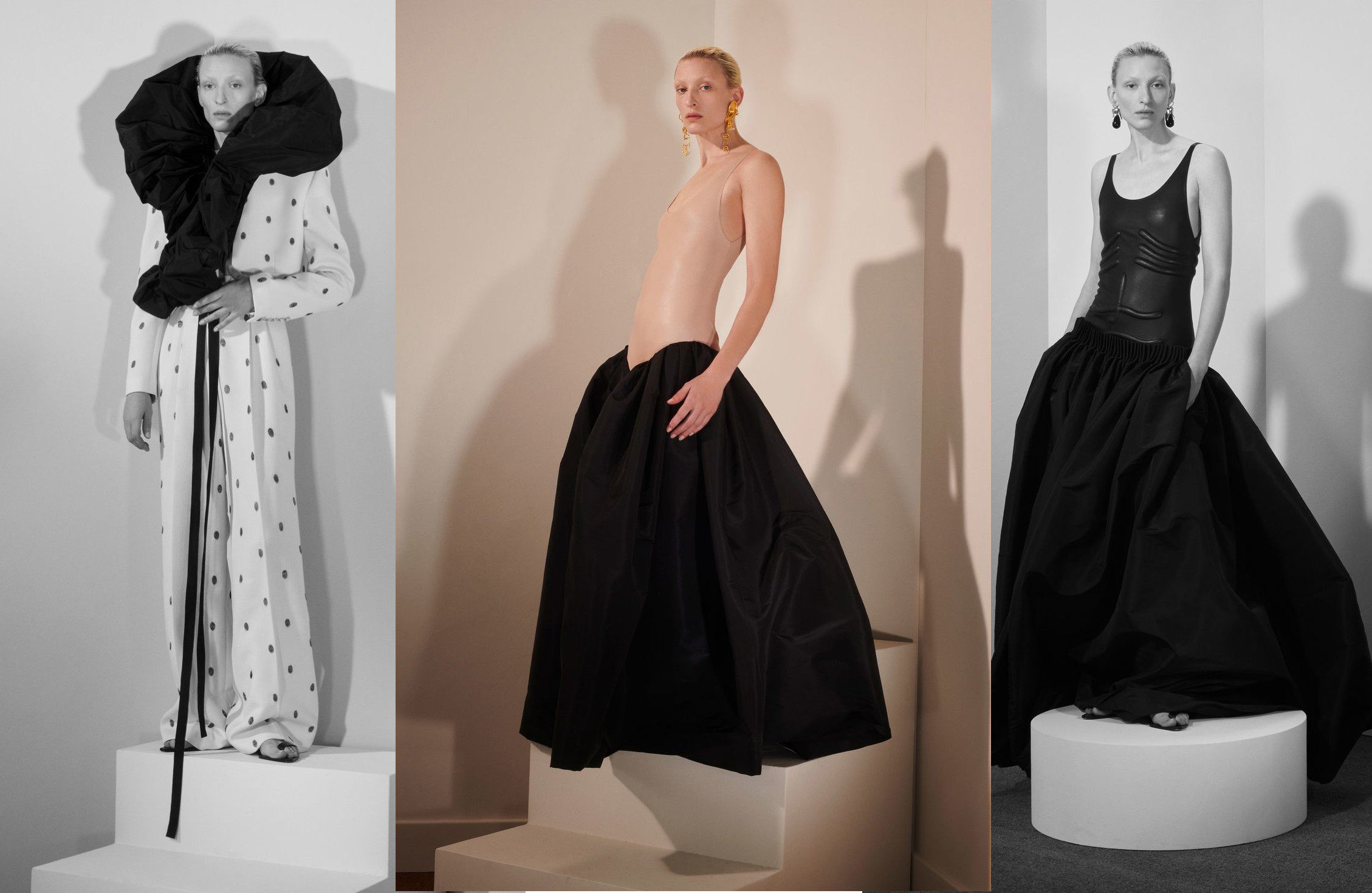 While Daniel Roseberry has only been with the label for less than a year, he seems to be approaching this collection with the “same desire to make a woman feel simultaneously like a performer of her own life and the architect of it.” 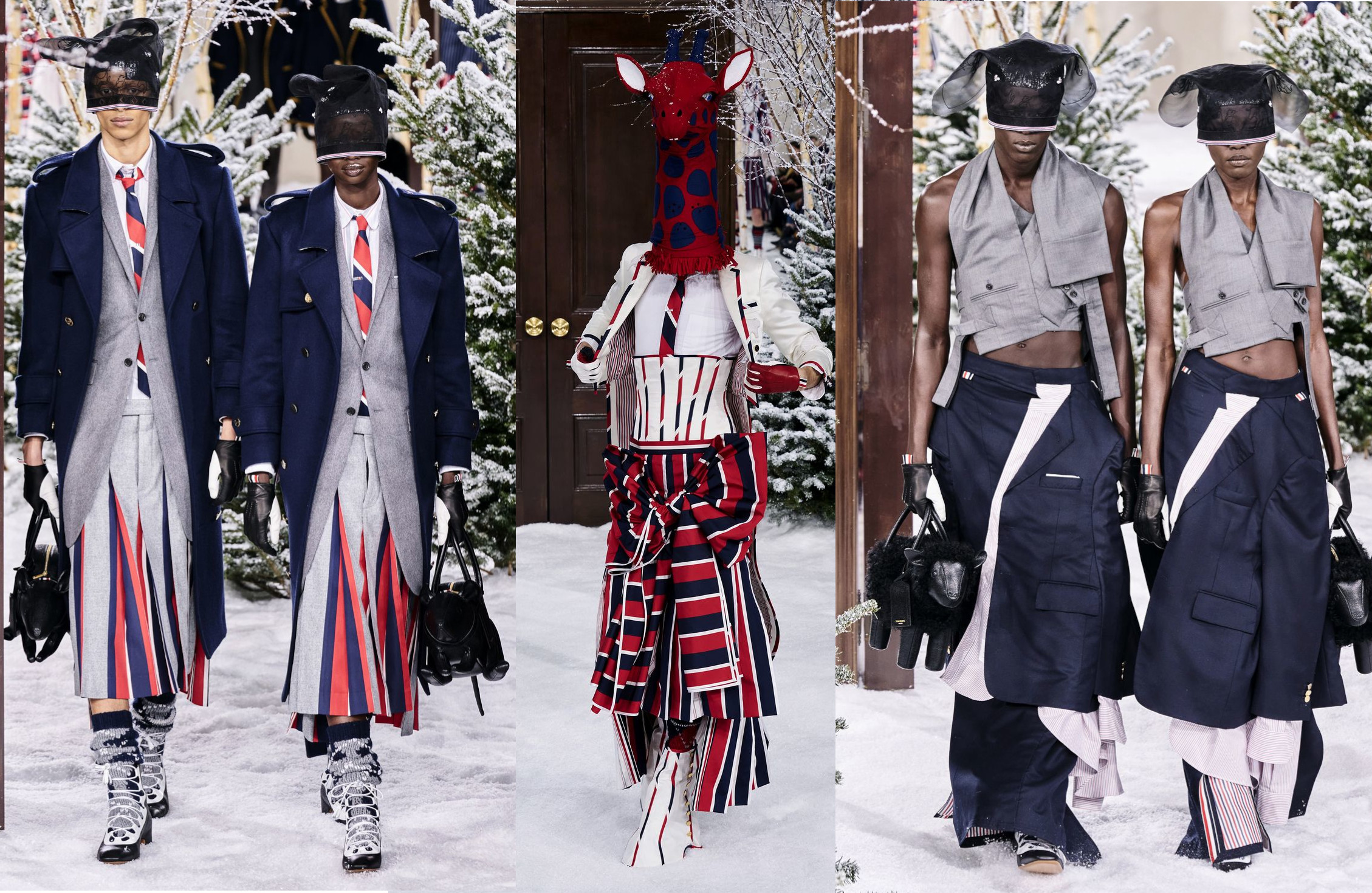 A whimsical winter wonderland was the overall aesthetic at the Thom Browne AW20 show, giving a special nod to Noah’s ark. Aside from the solo red and black striped giraffe that opened the show, the entirety of the collection came in pairs. Androgynous styles adorned the models, in matching tailored skirts and overcoats with an overall sense of preppy wearable clothing with an edge. 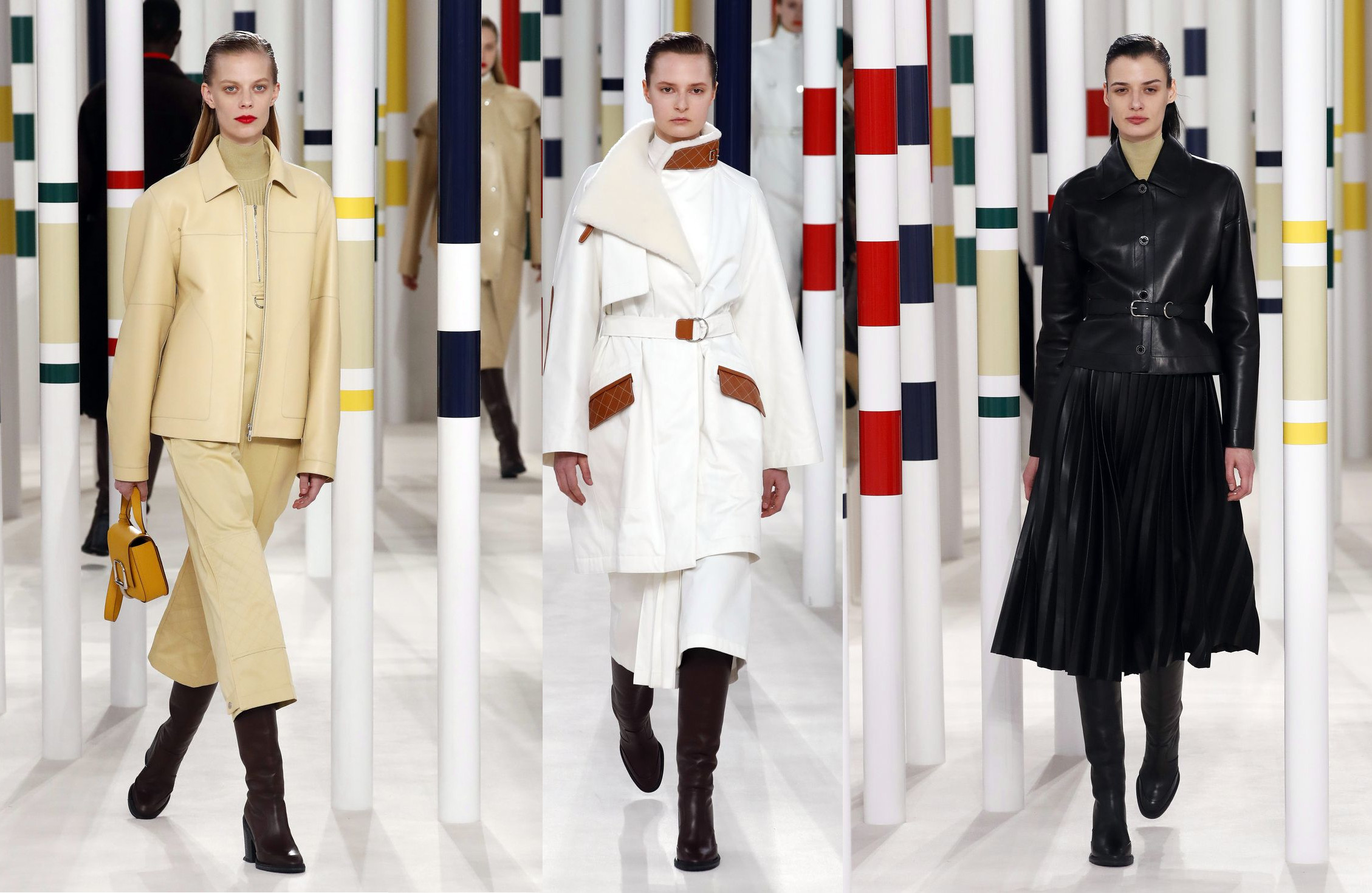 Hermès has long since provided luxury clothing that can withstand the test of time, even offering heirloom quality garments that fit perfectly into the increasingly eco-conscientious fashion industry. With ready-to-wear quality basic cementing themselves as the label’s staples; this season’s leather coats and luxe layering pieces in neutral colours boasted their well-crafted investment-piece status.

Designer Nadège Vanhee-Cybulsk show notes stated; “What is beautiful must be useful.” 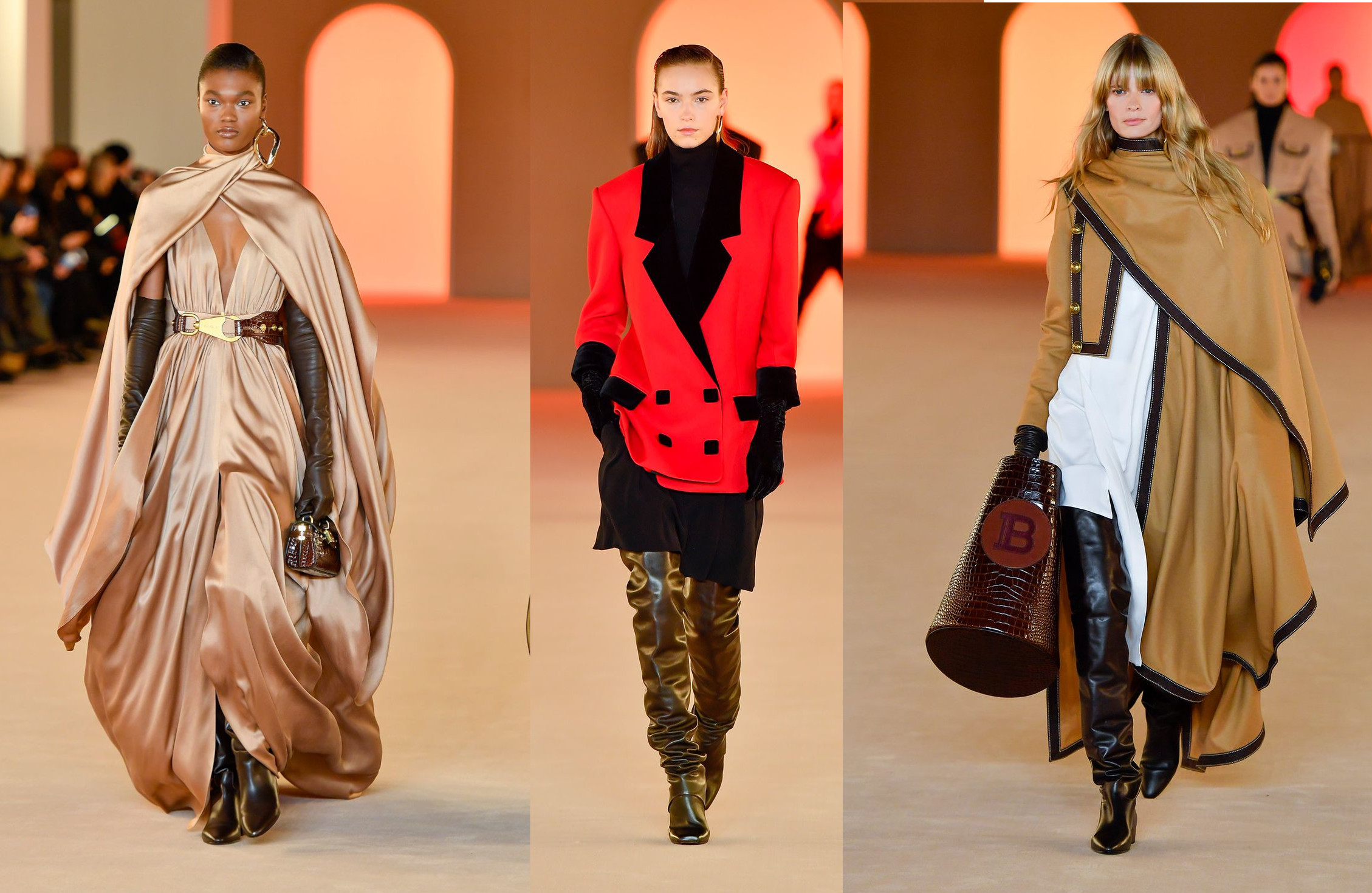 Balmain’s latest collection was anything but subtle, with colours, prints, and styles that were made for Grecian goddesses and warriors; preferably for their after 9pm rendezvous. Although there were definitely some luxury pieces that could be transformed for all the daytime Balmain loving fashionistas.

With every garment presenting a different extremity, there was a look for every fashion aesthetic. Either voluminous or oversized with bold colours, or neutral, skin-tight and short. The collection also featured a generous amount of sequins, powderpuff tulle, latex, and long over-the-elbow gloves. 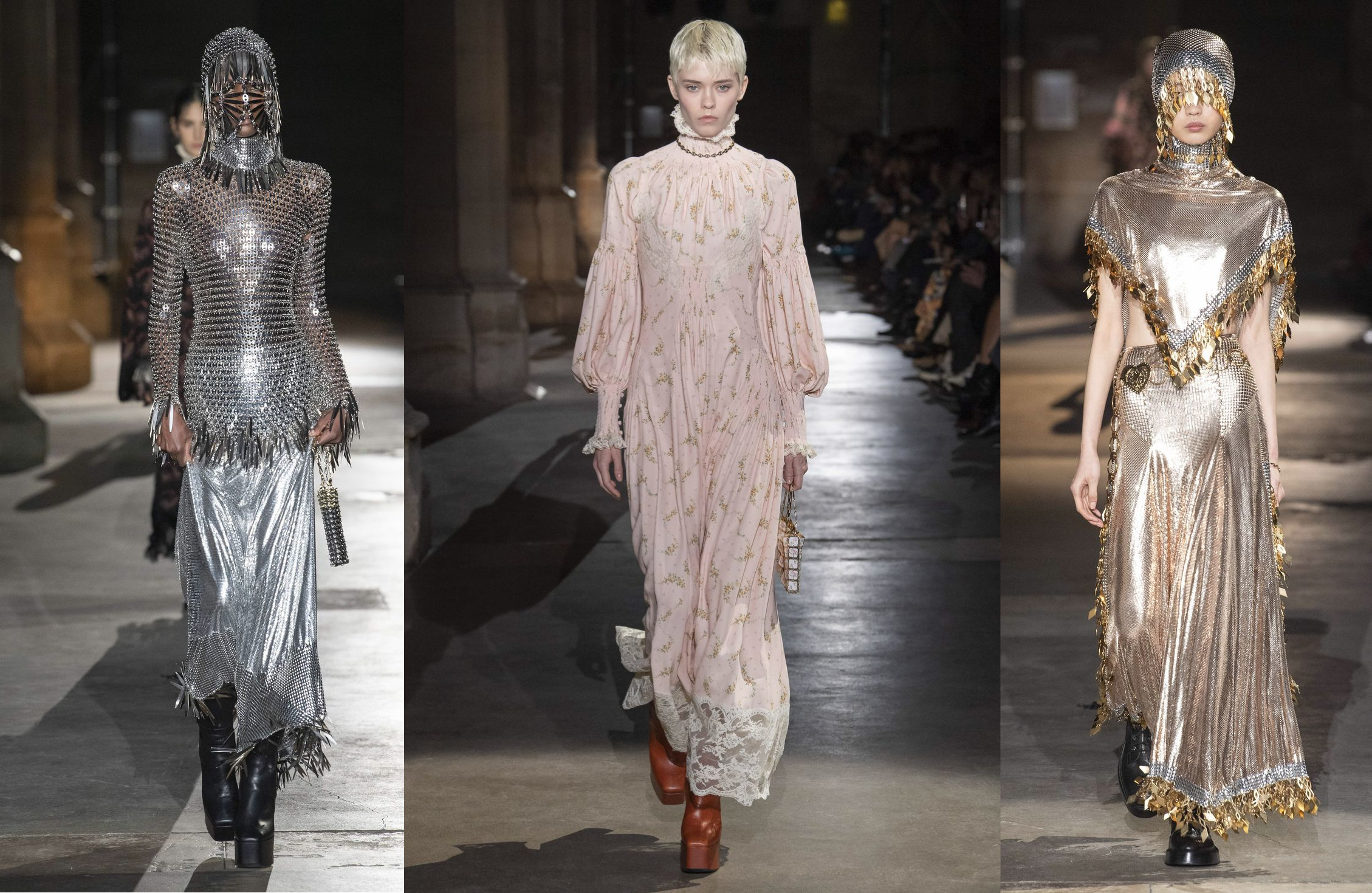 After making a name for himself during the Space Age, Paco Rabanne has always presented an feel of futurism. Creative director, Julien Dossena, has kept this futuristic vision alive by taking a slightly different approach. That is, the Dark Ages in a time synonymous with the King Arthur. Slinky chain mail akin to knights armour were made into two piece ensembles, along with long dresses with dainty floral prints and lace trimmings. The designs either encompassed the bold practicality of the knights of Lancelot, or the delicate strength of Guinevere. 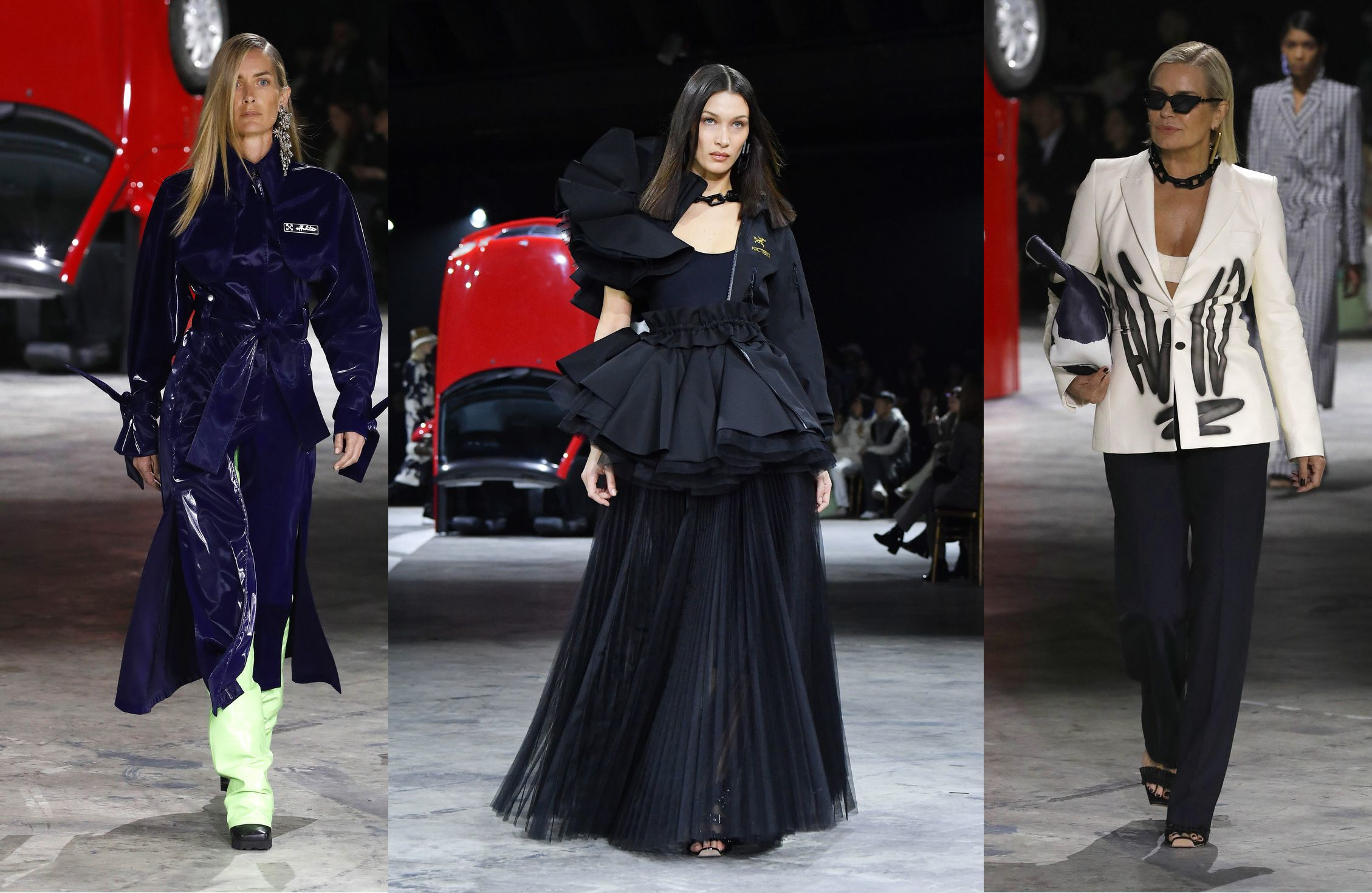 The New York Times referred to Virgil Abloh as “the Karl Lagerfeld of the millennial generation”, and looking at his AW20 collection, it’s hard to disagree. Abloh certainly knows how to create a jaw dropping runway show, this season we saw the likes of Karlie Kloss, Isabeli Fontana and all three Hadid women grace the catwalk in looks that pushed the boundaries of ready-to-wear garments.

The 21-year-old Australian designer made headlines with her athleisure label both at Melbourne Fashion Week 2019, and New York Fashion Week AW20 also dazzled Parisian audiences this fashion week. The namesake label, TalaMade, boasts genderless clothing as a ‘hybrid of Gothicism and modern-day streetwear’.

“Unfortunately, unisex design and androgeny in an institutionalised setting isn’t preferred, in the sense that you can’t put the clothes into a box….I think within Australia [gender neutral labels are] not as prominent as what it would be in, for example, Paris or Milan. But that’s what I wanted to do. I guess that’s why I wanted to do it. I wanted to try and create this uniform platform for everybody to be able to wear one item of clothing and change it to the way that they see fit,” Surace said.