As Heidi Klum used to say in her intro to the the Series Project Runway: “One day you’re in and the next you’re out”. Could the bubble be about to burst at Gucci ?

Well after an amazing rebirth, and rise after rise of the mercurial and mysterious Alessandro Michele, ever since he was installed at the House of Gucci in 2015 he seemingly could do no wrong, but now I can see the first signs of a coming fall. Fashion brands are just like skirt lengths, they follow the familiar pattern of ‘what goes up, must come down’. And just like the current stock market I fear the bubble may be about to burst.

You probably know that 43 year old Alessandro Michele was appointed Creative Director of Gucci in 2015.  In a flash, the Gucci ads we saw in magazines went from a study in beige elegance to being fantastically otherworldly.

In a touch of brilliance he immediately channelled the creative naiveté of Director Wes Anderson. His aesthetic was bold, weird and romantic. It was something completely new in designer fashion and instantly resonated with the Millennial style leaders that Gucci had never known.

The backdrops and sets in his ad campaigns had the exact same quirky retro colours of a wacky Wes Anderson film (The Royal Tenenbaums, Grand Budapest Hotel) and he introduced weird looking androgynous models, dorky hairstyles, old fashioned hair perms and over-sized glasses. The appropriation was so blatant that Anderson should have gotten credits.

The previous creative director Frida Giannini (and Tom Ford before her) had kept the brand slick and polished, but Michele turned everything upside down.  He completely redefined the brand’s aesthetic and turned it into something delirious.

In his own words, he “destroyed everything”.  But to be honest the Frida Gianni years were almost invisible.

It was a brave move on the part of Gucci CEO Marco Bizzarri to put the unknown Michele into this very high profile role.  The risk paid off nicely, because Kering (the company that owns Saint Laurent, Gucci, Bottega Veneta, and Balenciaga, among other luxury brands) saw Gucci’s revenue rise by 16% in 2015.  No one is more surprised than Michele himself.  He figured he’d do one collection and immediately be fired, but would at least have fun doing it.

He is refreshingly unmotivated by success or money, and stays far from the business side of Gucci, saying, “I prefer to play, like a kid.”  Aside from the business, the worst part of his job is the visibility and fame that come with it. He’s not interested in creating products to sell so much as ideas, beauty, and a new “language of expression.” 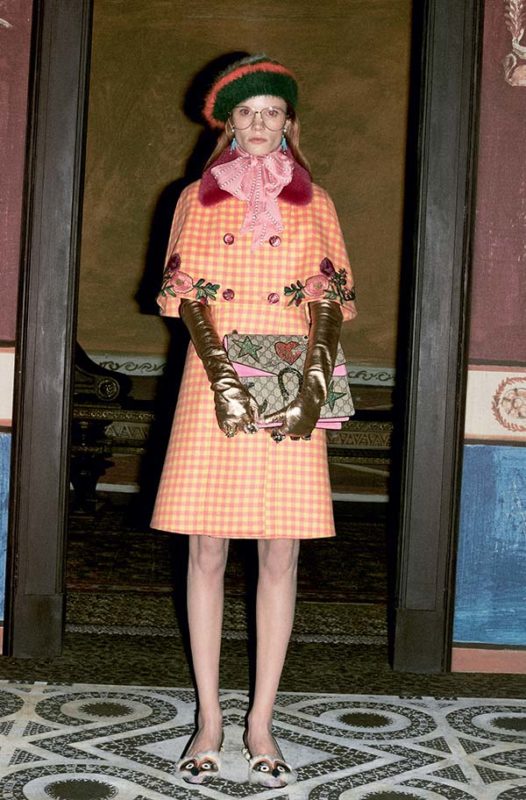 Now I know that sounds ridiculous and pretentious, but sometimes to stand out in fashion you need to be.

His idea of beauty is not traditional beauty.  For him, beauty is “a complicated language” that confuses the mind.  Beauty  is baroque, embellished, discordant, confusing, and a little dangerous.  Just like Anderson his designs are ugly but beautiful, and this dissonance and confusion is exactly the language of modern beauty Alessandro has created for Gucci. “I want to be confused by what I am looking at,” he says.  You have to study and unpick his designs to understand them.  He loves androgyny and ambiguity; he finds beauty in “the in-between.”

If nothing else Michele’s Gucci is a brand for it’s time. And that is the time of social media. He seems engaged in a consistently spirited and occasionally profound conversation with the zeitgeist, drawing from it, adding to it and revolutionising fashion in the process. Young consumers plant their flags and sculpt their images on social media, so Gucci, under Michele, does too. They expand and even explode the old parameters around gender, sexual identity, race and nationality, and Michele takes that journey with them, even leads them on it, giving them a uniform for it, a visual vocabulary with which to express it.

But treading this path is not without it’s dangers, as it is a perilous one and one miss-step could send you into the abyss. Which leads me to the real reason for this story and it comes via his weirdly bizarre and somewhat troubling 2020 advertising campaign featuring baby horses. Yes, that’s right baby horses.

The Press release states “Continuing the notion of freedom of expression presented during the fashion show, the new campaign conceived by Alessandro Michele, art directed by Christopher Simmonds and captured by Yorgos Lanthimos—reveals horses, animals known to symbolize liberty.””

Sure you might say that the Gucci brand was founded as a saddlery shop in Florence, and the humble equestrian connection is in it’s DNA, the horsebit loafer etc.

But this campaign is beyond quirky, it is just plain stupid. And it’s something would make even Wes Anderson scratch his head.

What do you make of it? Stroke of genius or stroke of madness.