In the midst of a global crisis, many people are looking for a silver lining – the world has noticed that, while the pandemic largely affects humans, our natural environment is flourishing and improving. These impacts are being praised, but some are calling this a form of ‘eco-fascism.’ What is eco-fascism, and what does this mean in the context of the coronavirus?

It is no surprise that the natural world has reaped the benefits of our changed daily lives. Air quality in China is an example of this; Hubei province (where the coronavirus outbreak began) experienced a reduction in nitrogen dioxide levels throughout January and February. In China overall, carbon emissions have dropped down by 25%, as transport ceases to operate and factories shut down. These effects are being seen on a global scale – pollution in New York has been reduced by 50% as the city remains in lockdown and emissions are also down in European countries.

Some have even exaggerated the environmental impact – viral tweets showcasing pictures of dolphins and swans supposedly swimming in the canals of Venice, as a result of decreased tourism in the area, or elephants getting drunk on corn wine in a rural Chinese tea plantation. Many saw this as a positive ‘side effect’ of the virus, however, the tweets were debunked – pictures of the dolphins were not taken in Venice, but miles away in Sardinia, before the virus began; and swans never really ‘returned’ as they have always frequented the Venice canals. As for the elephants, yes they sometimes roam Yunnan Province, China, but these aren’t the ones in the photos and no they didn’t get drunk and pass out in a tea field.

The environmental impacts have led to many adopting the attitude that ‘humans are the virus’ and that ‘coronavirus is the cure’ that the Earth ultimately needs to reset. Despite the negative effects on humans, according to these sentiments, the virus is some sort of retribution for how humans have been treating the Earth. 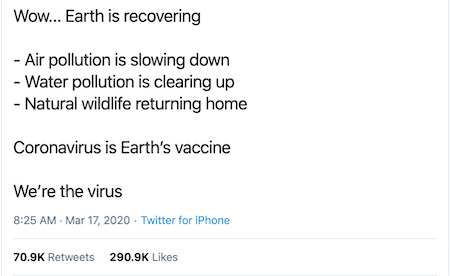 These tweets are an example of ‘eco-fascism’ – an authoritarian ideology that says humanity should sacrifice themselves for the environment. In these tweets, the death and suffering of humans due to the virus is minimised because of the seemingly positive impact it is having on the environment. Eco-fascism attributes blame to humans as a whole, rather than localising the problem to certain people – as one post counters:

“Fossil fuel CEOs are destroying the Earth. They have names and addresses. “We” aren’t the virus.”

The issues with eco-fascism also lie in its background. Despite being the domain of many lefties and greenies – eco-fascism historically has some links to racism and white supremacy, as various key environmentalists have also advocated for eugenics, population control and white supremacy.  In recent years, eco-fascism has even led to eco-terrorism. Patrick Crusuis, the shooter in the 2019 El Paso shooting, cited population control as a solution to environmental burden. Similarly, the Christchurch shooter described himself as an “eco-fascist” and claimed that “immigration is environmental warfare.”

Eco-fascism, despite citing humanity as the cause, often unfairly targets those who are poor and oppressed, even if these communities are the ones most at risk of environmental problems. Eco-fascism fails to look at environmentalism as a systemic issue which affect groups differently, and thus, can perpetuate ideas of supremacy. Adopting eco-fascist attitudes in the age of coronavirus can be particularly dangerous, highlighted by the xenophobic and racist attitudes towards Asians that have occurred since the outbreak.

Considering the current doom and gloom state of the world and the fact that environmental policy tends to be politically neglected, it is understandable that people will seek out the good. However, it is problematic to conflate such a decimating pandemic to a ‘cure for the Earth,’ as it negates the complexity of the issue. These environmental impacts are a direct result of our ceased activities, but there is no evidence that the benefits will remain after the pandemic– it could be that our normal routines resume, and that a surge in carbon emissions will occur once it all ends.

However, the world’s response to the environmental impact of coronavirus will hopefully shed some light on how we view environmental issues, in order to help us solve them. Ideally without targeting humanity as a whole, or scapegoating the marginalised in the process.