Hi, I’m Paul Roberts welcome to my PODCAST Channel “THE FUTURE” where I cover BREAKING TRENDS FROM AROUND THE WORLD

In our ever accelerating times, keeping ahead of the latest breaking news and trends from the world’s of fashion, music, film, art, tech, activism, is a time consuming daily challenge. Sure the information is all out there, but it is a time consuming ordeal to scan all the necessary sources. As Darwin said survival depends on how quickly you can adapt.

In this PODCAST #109 I want to look forward into our post Covid-19 world in 12 months time.

Though the phrase “new normal” has gotten thrown around a lot lately, in many ways it is something of a misnomer. Here on the ground in Sydney Australia, a lucky country who has fared better than most with the virus, things are very far from normal – new or otherwise – with businesses closed, employees working remotely and people sequestered in their homes for at least the next month.

Consumers (that were once known as people) are concerned for their futures – both health-wise and economically – and over a quarter of American small businesses don’t think at this point that they will reopen.

A quarter of all small businesses gone in a metaphorical snap of the fingers. When I ponder the coming Post Covid-19 reality, my mind plays back that famous scene in Fight Club with Tyler Durden. Fight Club is the film based on a 1996 novel by my favourite director, David Fincher (Palahnuik and Fincher, what a dream team, and it stars Brad Pitt (as Tyler), Helena Bonham Carter (as Marla) and Edward Norton (as the Narrator). Fight club is considered one of the most controversial and most talked about movies of the 19th century and become one of the to-watch cult films. I love the way Chuck Palahniuk always provokes thought.

“Man, I see in fight club the strongest and smartest men who’ve ever lived. I see all this potential, and I see squandering. God damn it, an entire generation pumping gas, waiting tables; slaves with white collars. Advertising has us chasing cars and clothes, working jobs we hate so we can buy shit we don’t need. We’re the middle children of history, man. No purpose or place. We have no Great War. No Great Depression. Our Great War’s a spiritual war… our Great Depression is our lives. We’ve all been raised on television to believe that one day we’d all be millionaires, and movie gods, and rock stars. But we won’t. And we’re slowly learning that fact. And we’re very, very pissed off,”  – Tyler Durden

It now appears clear that Covid-19 will indeed be our Great War and Great Depression rolled into one. Where unbridled consumer confidence  once promoted the carefree ‘urge to splurge’, the new prevailing uncertainty and lingering fear will make frugalism the new norm for the 2020’s. 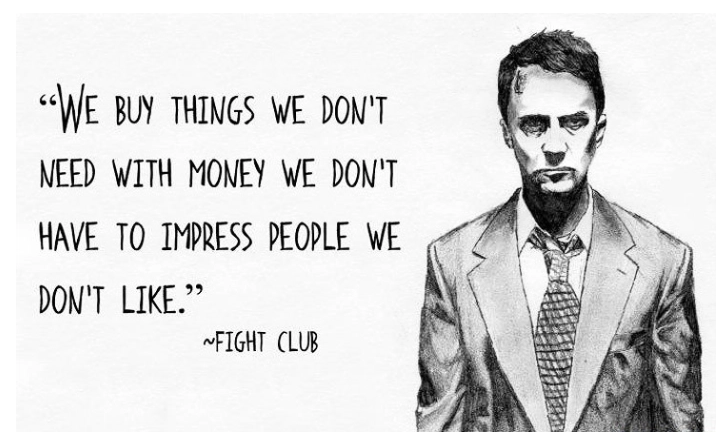 The capitalist system of our Western economies has run on consumer confidence for the last 100 years, so what happens when it changes to run on fear and insecurity instead?  The answer is everything.

When we are confident about the economy we tend to spend even beyond our needs, and beyond our means. This is at the core of the global advertising and marketing myth: keep consumers always wanting more. In this mode we even spend the salaries we haven’t yet even earnt, and just rack it up on debt, and this was never a problem in the past as there was always an abundance mentality.

We assumed that our incomes would keep rising, our businesses would grow year on year, that their profits would keep rising, and that fed into this Pollyanna-ish abundance mentality. Stockmarkets and real estate prices kept rising, and endless economic growth promised good times for all. Now we know that all that was an illusion.

So what happens now when the music has stopped and business and consumer confidence evaporates?

A giant reset is what happens.

A previously trend addicted unemployed young Uni graduate has stopped buying new sneakers. A clothing store clerk is reluctantly forced to give up his beloved gym membership. An events planner, his pay cut by four-fifths, now moonlights as a takeout Uber delivery driver — and can no longer afford to eat out.

Whilst some of our previously closed offices, factories, restaurants and stores may start to reopen in the weeks to come it may not really matter, as things will not be like before. As the hordes of people who once liked to spend up big will be MIA. Their behaviours in a Post Covid-19 reality will not be as they were before, People are just not going to want to spend on anything that isn’t essential, and until this can be solved, a return to a Pre Covid-19 normality in any country — and, by extension, the world — will be difficult to rekindle.

In fact, I doubt things will ever go back to the way they were. And this leaves a devastating reality check on a vast number of business categories and types of employment.

When the new Coronavirus began to spread around the world this year, many economists expected a “V-shaped” recovery, with a sharp downturn followed by an equally swift rebound. But those projections were mostly predicated on a short pause in activity that could be quickly reversed. As lockdowns have stretched into months — and with disruptions likely to continue for weeks or months — those hopes have faded.

The effects of Covid-19 are a long way off running their course. With each month of unpaid bills and rock-bottom sales, more businesses will go bankrupt or decide not to reopen. More workers will drift away from their employers, turning temporary layoffs into permanent job losses. More loans will lapse into delinquency, endangering banks and the broader financial system.

And as if that were not enough around the world’s Governments are preparing for a second Pandemic, not born of a virus but this time through mental illness, as depression anxiety and suicide add to an all new death toll.

Empowering consumer confidence Post Lockdowns will be an almost insurmountable problem. Millions upon millions have lost their jobs or had their pay slashed. And I fear many of these industries will never recover. Billions were shaken by weeks of idleness and home confinement, a time when many had to depend on their savings just to eat. For people of all ages and walks of life once known for their unabashed consumerism and spending splurges, all of a sudden the idea of saving and thrift will hold a sudden new appeal.

In this all pervasive period of uncertainty, even the wealthy will be drawn towards this new trend of frugalism, as opposed to amassing more ridiculous designer handbags. And this mentality will have a widespread knock effect on pretty much every area of discretionary expenditure. Economies will not be going back to any kind of normal.

Chloe Cao, a Beijing translator of French stage dramas, once spent over $200 a month in restaurants, $70 a month in coffee shops and as much as $170 for a tube of imported face cream. Now unemployed, she cooks for herself, brews her own coffee and buys $28 Chinese face cream.

“My spending power has suffered a cliff-like drop,” said Ms. Cao. “When I find a job, I will start saving money, and I can’t live a wasteful life like before.”

China’s consumer confidence problem offers potential lessons for rich Western countries like Australia, United States and Europe, which are only beginning to plan their recoveries. Even if companies reopen, the real challenge will be enabling or persuading stricken and traumatised consumers to start spending money again.

In my next feature I will look at a group of industries that I predict will either fail, or have to be reinvented from scratch. And they are;

The Food and Beverage Service Industry

If you want to want to know where your world is headed first subscribe to the FIB Platinum Content Membership.

FIB’s Platinum Content Membership is a revolutionary new service that provides our members an unlimited rights free use of our extensive Content library. Never before has such a resource been made available rights free to allow people to dominate in their Content marketing, and never at such an unbelievable low annual fee.