Join the rave this May 15th at Sydney’s 24-hour dance marathon!

The post-lockout Sydney party scene has been bleak to say the least. After the introduction of state-wide lockout laws in 2014, the 24-hour scene in Sydney came to a screeching halt in an effort to curb the increasing amount of late-night violence.

Fast forward to March 2021, which saw a shift towards these laws changing. As Timeout explains:

“It’s been a long time coming, but as of March 8, the lockout laws first introduced in 2014 are officially no longer in effect anywhere in Sydney. While the laws were scrapped for the CBD and Oxford Street in January 2020…”

Recently, there have been revival discussions of Sydney’a late-night scene.

To please late-night lovers, this celebration spans over 24-hours. Sydney-siders will enjoy a fun-fuelled line-up which begins at 8am on Saturday May 15th and finishes up at 8am on Sunday May 16th. The event will be 24 hours of dance which spans across eleven venues.

24 Hour Party is being hosted at:

The entire 24-hour event was organised and curated by hospitality giant Solotel. They are joining powers with taste makers Heaps Gay, Motorik, Picnic, Fruit Bowl, and FBi Radio for the occasion. 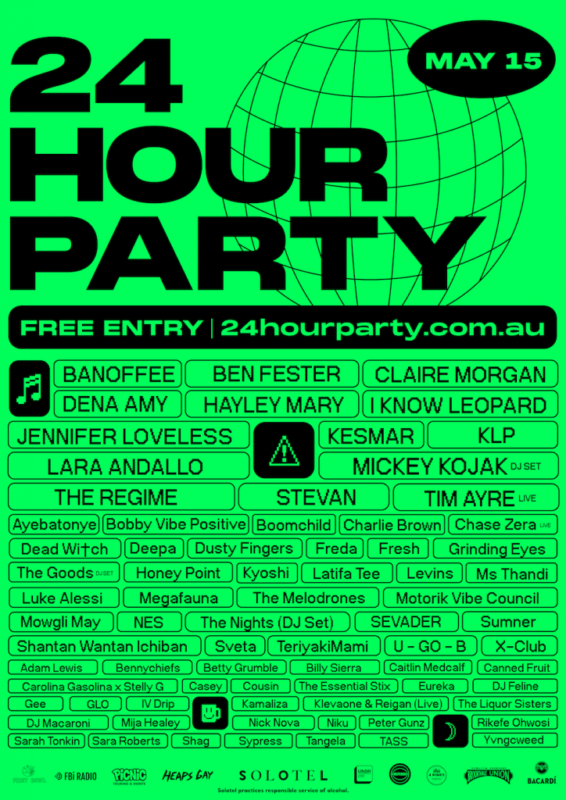