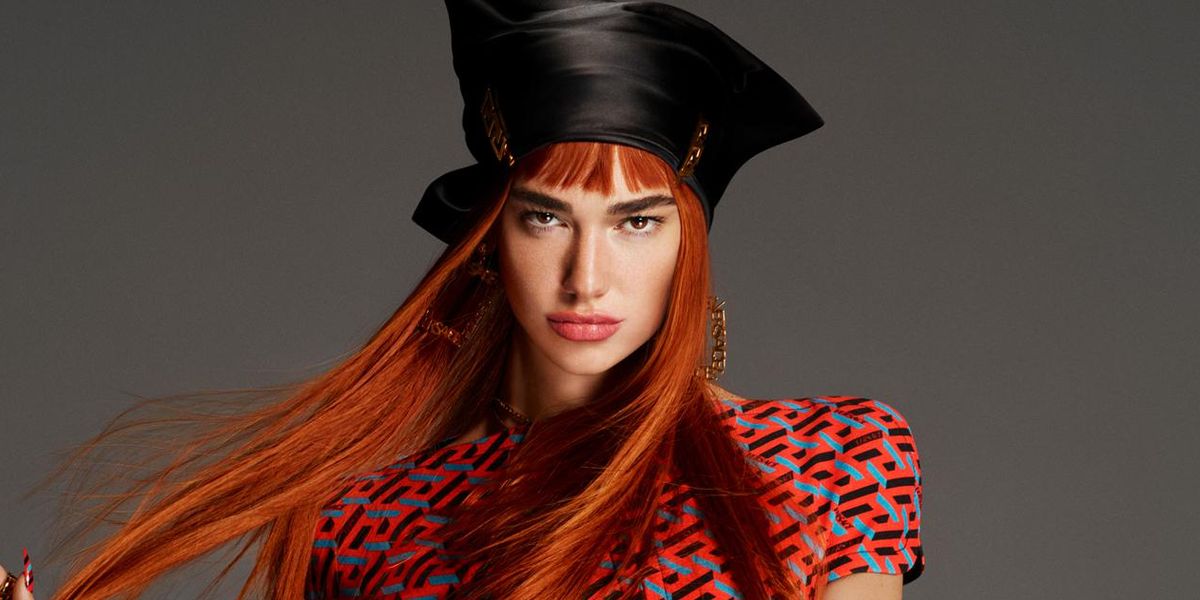 After years of being a “Versace girl”, Donatella has made Dua Lipa the face of the fashion house’s Autumn/Winter 2021 campaign.

Dua Lipa has been flaunting Versace pieces and custom-makes for years. After many collaborations and a growing personal relationship, it was only a matter of time before the singer starred in a campaign.

Lipa’s collaboration with Versace dates back to 2019, after the label dressed the star for her first Met Gala in 2019. Since then, many of Lipa’s achievements and milestones have been celebrated in Versace’s wardrobe. The fashion house’s many signatures have been seen on the pop star, from gold safety pins, corset bustiers, and tailored mini dresses.

Recently, she wore an Atelier Versace look on the red carpet of the Grammys where she picked up the award for Best Pop Vocal Album.

And the partnership and love for Versace goes beyond award-winning events, from the star’s Instagram to her everyday wardrobe. Last New Year’s Eve, the singer wore a crystal flecked Versace mini-dress. She also regularly posts different Versace outfits, worn usually while with boyfriend Anwar Hadid, including neon leopard print jeans and a glossy leather jacket from the brand’s Resort 2020 collection.

Versace runway pieces have even featured in Lipa’s own music videos including ‘Levitating,’ ‘Don’t Start Now, and ‘New Rules’.

Donatella told WWD that she always aims to “create a personal relationship and there must be something that strikes me.

“it’s never about dressing a celebrity just for the sake of it. I’m happy if I can become a friend, a confidante.”

This seems to be the case, clear in the designer’s personal relationship with the young singer. Despite consistent wide-ranging popularity for the brand and long-term infamous styles, there is something special about Dua Lipa.

While certain pieces and looks have been worn by other celebrities before the pop singer, Lipa’s outfits are completely tailored to her. Her love of boldness, butterflies, glitter and pastel colours have all made their way into the collaborations between the star and fashion house. They exhibit Lipa’s vibe which radiates fun, youth and flare.

After meeting in London, Donatella said,

“I knew she was a beautiful girl, but when I heard the timbre of her voice, I immediately realised that she had something unique and special.”

The iconic brand stated that the singer’s “impeccable style, fearless attitude and universal appeal” make her the perfect partner for Versace.

So far, the brand has revealed a series of photographs featuring Dua Lipa as the face of the new campaign.

Shot by Mert Alas and Marcus Piggott, the 25-year-old star shows off red hair and a fringe. This is likely to be a signature look for the line, as Gigi Hadid debuted long red hair for the brand’s AW21 show in March.

On changing her hair, Donatella described the star’s willingness for the transformation as a sign of audaciousness and self-confidence, “Fiery red is a symbol of passion and strength.”

“She also trusted me when I asked her, she did not hesitate,” the designer said.

The iconic brand has announced that she is also presenting Versace’s new La Greca Pattern.

A Future in Fashion

Last week’s shots are just a preview of what you can expect to see in the striking new campaign. There’s no doubt that the long-term love and excitement shown by both Donatella and Lipa means that we are in for something special.

The star described her partnership with Donatella as “an unforgettable experience”. On Twitter, she said that the shots came out “better than I could have imagined.”

“I’m so thrilled to be working with the iconic house of Versace. Getting to work so closely with Donatella and bonding over our shared love of fashion has been surreal.”

Being the phenomenon that is Dua Lipa, her growth into the fashion industry has been a long time coming. Excitement for the collaboration is sure to spark further big brand collaborations and modelling endeavours for the global superstar.

As the singer’s first high-fashion campaign there is no better fit than Versace. Donatella told WWD, “Right now, I couldn’t think of any other woman who can better express the spirit of Versace and this collection than her.”

And there’s no doubt that the brand’s campaign will have a ripple effect on the industry by using one of today’s hottest celebrities to showcase their new collection.

You can expect to see the exciting full campaign and accompanying film on August 30.