The MET Gala has returned after the unfortunate cancellation of the anticipated “About Time: Fashion and Duration” theme in 2020. A fundraising benefit for the Metropolitan Museum of Art in NYC, the theme this year was “In America: A Lexicon of Fashion”.

The hosts this year were Timothée Chalamet, Billie Eilish, Amanda Gorman, and Naomi Osaka. They all effortlessly represented the younger generations of the fashion world, with Chalamet in Haider Ackermann, Rick Owens, and Converse, Eilish in Oscar de la Renta, Gorman in Vera Wang, and Osaka in Gucci.

Frank Ocean made his appearance in a Versace suit, his Homer brand necklace, and his signature Blonde all-green buzzcut. The most eye-catching part of his look, however, was the green-skinned, anamorphic infant he held on his hip through the night.

Jennifer Lopez is a notable attendee that took the theme in stride. She appeared in a Ralph Lauren lowcut cowboy-inspired piece, complete with the leather hat, belt, and cuffs. The outfit wouldn’t be complete, however, without a high slit to let her perform her signature leg-out pose.

Lupita Nyongo took the theme and truly ran with it, showing up in a Versace jeans couture gown that was described by many as a true testament to American fashion. This was all topped off with diamond accessories by De Beers, and hair inspired by artist Lorna Simpson’s artworks that celebrate black hair.

The last attendee to grace the ball’s runway was all-round favourite Rihanna, appearing with her partner ASAP Rocky. She adorned a boxy black floor-length Balenciaga piece, while ASAP wrapped himself in a multi-coloured “comforter” by Eli Russell Linnetz, before throwing it off to reveal his ruffled shirt and black blazer ensemble.

While the veterans of the MET Gala continued to stun, newcomers also appeared and showcased their own fashion prowess. From singers to YouTubers, many proved their place at one of fashion’s most coveted events.

To start the night, Billie Eilish showed up in arguably the most true-to-theme and eye-catching look of the night. She was glammed up in a peach ball gown by Oscar de la Renta, inspired by Marilyn Monroe’s 1951 Academy Awards outfit. However, the vegan and animal activist only agreed to wear the dress if the brand terminated all sales of fur in their line, and they happily obliged.

Another eye-catching look was donned by none other than Lil Nas X. While the theme of his costume had fans scratching their head, he still caught the eye of everyone in the room. He entered the room donning a brilliantly golden royal mantle, stripping it for equally striking golden armour, and leaving the runway with a skin-tight bedazzled one piece. All three pieces were custom made by Versace for the event. 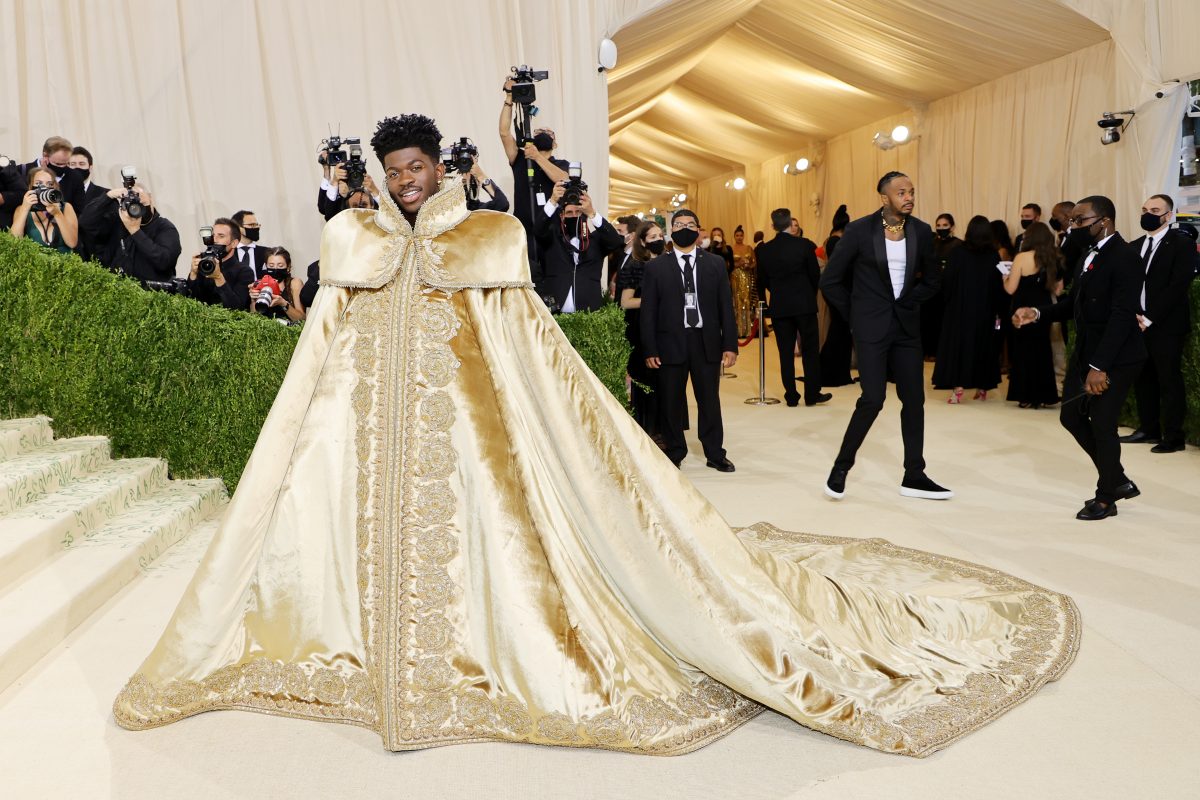 Olivia Rodrigo also made her first appearance at the MET Gala in an all-black sheer Saint Laurent catsuit topped with feather boas.

Blackpink’s Rosé and solo-artist CL, made their debut at the MET Gala as the first female K-pop idols to attend the coveted event. Rosé sported a black YSL mini dress with a ribbon and clung to the arm of YSL’s creative director throughout the event. CL donned a Christian Dior denim piece with its front bow and shape inspired by Korea’s traditional dress, the Hanbok.

19-year old Indigenous model Quannah Chasinghorse walked onto the runway in a lustrous gold suit by Dundas, showcasing the look with Navajo jewellery and her traditional tattoos. She was a standout participant by Twitter users, praised for her look and contribution of Indigenous American culture to the event.

The MET Gala wouldn’t be the event it was if attendees did not wear looks that made social statements. Youtuber NikkieTutorials (Nikkie de Jager) wore a wonderful teal chiffon dress decorated head-to-toe in flowers. The phrase “Pay It No Mind” was also featured on a ribbon on the dress’ front. The dress was made as a tribute to transgender and LGBTQ advocate Marsha P. Johnson, and was especially significant to Jagger after she came out as transgender last year.

And finally, Alexandria Ocasio-Cortex, a popular American politician that also goes by AOC, and model Cara Delevigne, showed up to the event in looks criticising the patriarchy and tax exemptions for the rich.