After the pop star disappeared last week, she logged back on with photos of her celebrating her engagement.

Last week, Britney Spears had deleted her social media to celebrate her engagement with Sam Asghari. Now, Spears is back on Instagram after briefly deleting her account. The singer reactivated her account with some photographs from the recent trip with Asghari.

She shared two photos, a black and white selfie and a coloured version of the same photo, taken over the weekend. In the caption, she explained that she couldn’t leave Instagram for too long.

“Some shots from my weekend getaway to celebrate my engagement with my … holy shit … FIANCÉ,” Spears wrote. “I still can’t believe it !!!! I couldn’t stay away from the gram too long so I’m back already!!!! Psss I took these in Palm Springs with clip-in extensions!!!!” 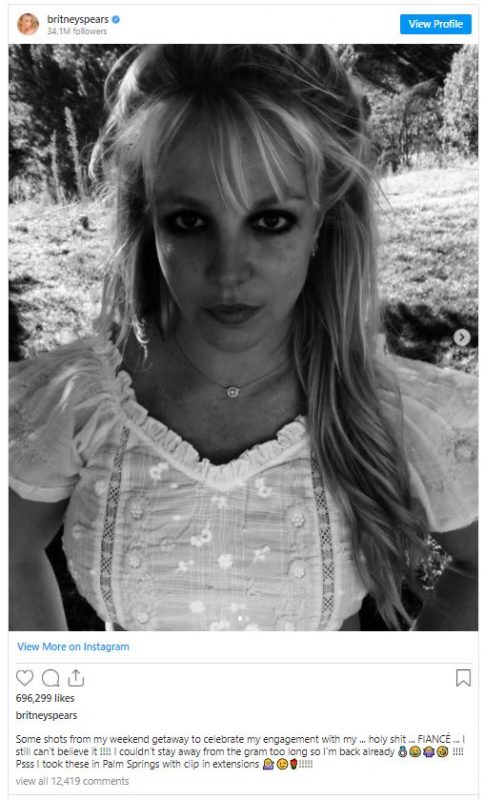 Britney Spears deleted her Instagram on Tuesday, September 14th, after sharing a post that thanked her supporters in the #FreeBritney movement.

Spears said the decision was hers. She also recently indicated she would be posting less in the future.

It seemed as though she was genuinely free from the conservatorship case, which has her fighting her Father over her finances. This is what prompted the #freebritney movement when fans starting demanding justice for the pop star. Britney’s last post before deactivation thanked fans and shared an article about living a restrictive lifestyle.

Is She Really Free?

Be that as it may, many fans have raised concerns over Britney’s sudden return. The images shared are allegedly from months ago as she was last seen with red hair as opposed to the blonde in the posts. She also seems to have gone against her promise to post less as she already posted three times today.

Many have raised suspicions of someone controlling Britney’s account as her comment section has flooded with fans in disbelief.

“Are you trying to tell us something?”

“GIVE HER INSTAGRAM BACK WE KNOW THE RECENT PICS ARE FROM FEBRUARY,”

Now people have started to wonder if her account is once again controlled by a third party and if Britney Spears is truly free again.