London Fashion Week returns to physical formats in full force this week. Presented by Clearpay, it ran from Friday 18th through to Tuesday, February 22nd, 2022. It was s digital-physical hybrid affair, showcasing the best of both womenswear and menswear brands.

As the autumn/winter 2022 shows continue, the fashion pack migrates from New York to London. LFW hosts a slew of firsts this season. Priya Ahluwalia and Conner Ives’ make their debut. Simone Rocha, Maxmillan and Robyn Lynch appear alongside other design favourites – exemplifying the cutting edge of contemporary style.

Fashion on London’s streets is as daring and experimental as it is on the runways.

Statement-heavy outerwear and colliding prints are popular right now – thrown together with some of the season’s most sought-after accessories.

Layering makes a comeback in a brand new way – mixed weight fabrics with cut-outs, and a clever tonal or pattern clash.

Tulle is a FW22 season favourite, finished off with a utility-style boot in a new hue.

In 2016, Simone Rocha won Harper’s Bazaar ‘Designer of Year’ Award at the 2016 Fashion Awards. Since, she’s been busy making headway as a global and award-winning brand.

Rocha’s FW22 collection encompasses mixed elements. At times, it’s lightweight and sheer, with tulle and satin flourishes. At others, it navigates the line between avante-garde and utility; makes for a collection with maximum wearability and a unique expression.

Check out the full presentation below:

Lulu Kennedy’s prodigies, Jawara Alleyne, Chet Lo, and Maximilian, maintain Fashion East’s stellar reputation this season. Throughout the presentation, each designer pushes the boundaries of their own aesthetic.

Before her first runway show, 3 LVMH prize-nominated Priya Ahluwalia said, “Bollywood and Nollywood are two places where you see Black and brown representation that’s not through a European gaze. They’re very authentic in their points of view; I’ve watched both since I was a kid”.

“In both those genres, you can see Black and Brown lives and stories being told in a non-Eurocentric way, so they’re really special to me” 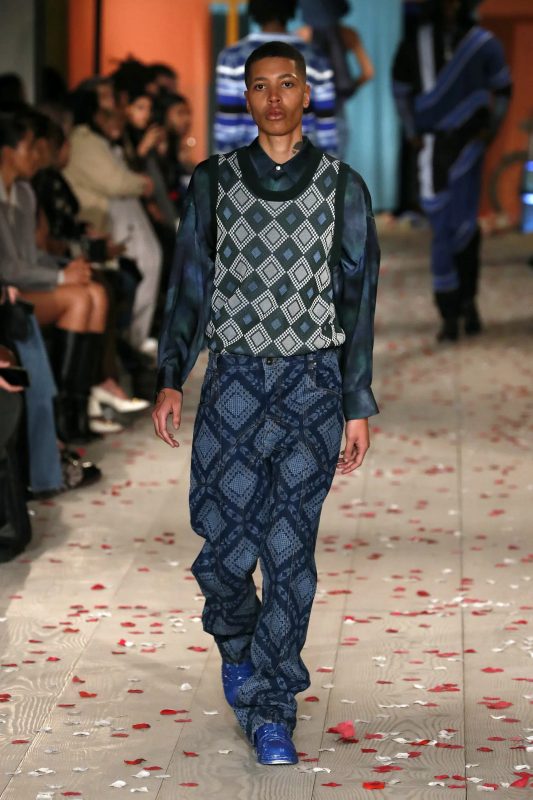 Ahluwalia’s notoriety for design is based on her own cultural history; a unique and unmatched expression. The FW22 presentation is a fresh take – a welcome breath of fresh air which pushes the boundaries of ethnocentric exploration.

Dublin-born menswear designer Robyn Lynch returned to fashion week on Saturday after a two-year absence from the official calendar. In the meantime, her brand has been supported by the fashion week’s support platform Newgen for two years. He tells WWD,

“I am really excited to be back doing physical shows. Although I must admit that over the duration of COVID-19 and adapting to different forms of creativity to showcase new work was enjoyable”

Lynch debuted her first two collections for Lulu Kennedy’s Fashion East in the fall of 2019 from her family home in Malahide, Ireland, before relocating to London around the time that the pandemic hit worst.

London Fashion Week luminary Roksanda Ilinčić has put a non-traditional spin on activewear. The designer offers up something interesting and unfamiliar this season with windbreakers, anoraks, and puffer jackets. The Serbian designer also experiments with couture proportions and bold colour blocking.

Roksanda Ilinčić collaborates with Irish artist Eva Rothschild on this seasonal exploration of duality. A study of realism and dreaming.

“Eva’s sense of colour and bold graphic work is something that really resonates with me,”

Fila’s distinctive logo, peeking out from beneath one of the first voluminous dresses is a nod to a new direction.

The series of logo-stamped looks signify the unlikely collaboration between Roksanda and the Italian sports brand. It’s a clever move within a changing industry.

Check out the full presentation below:

Debuting at London Fashion Week, 2013 he received critical acclaim. The Hong Kong-born designer attended Hong Kong Polytechnic before transferring to London College of Fashion; where he interned with Alexander McQueen.

Hong Kong’s Kay Kwok had a two-season run in London in 2014. At the time, his futuristic appearance drew little attention in the Western world.

Closing up London Fashion Week on Feb 22, he tells WWD that he “hopes to lead people to see the possibility of the great inclusive love.” Kwok’s FW22 collection, “Chapter 1,” tells audiences “a survival story about a group of abandoned humans on earth in the 2100s.”

He goes on to say,

“In the past, I focused mostly on the visual appearance, such as my futuristic prints and styling. Now I think more about what kind of clothing brand the world really needs. Hence the brand is going toward a genderless and seasonless path”

Check out the full schedule here.