Ridley Scott’s House of Gucci is followed by controversy and mixed reviews, but one thing is never in doubt. That is, the tantalising fashion on display throughout the film’s three-hour run. Below, we discuss the strongest fashion moments from the biopic thru its main characters – and the inspiration behind the looks.

Rodolfo joined the family business in 1953 when his father, Guccio Gucci passed away, and eventually divided the business with his older brother Aldo. Oscar Award-winning British costume designer Janty Yates, who is behind the iconic looks in the film tells Tatler Asia,

“Gucci is rich. When you see the clothing, [it’s] rich, and I think that it’s purposeful.”

Rodolfo Gucci, portrayed by Jeremy Irons, has a bold style, conjuring effortless wealth. Rodolfo and Aldo Gucci preferred the subdued suits of Savile Row. In his introductory scene, Rodolfo wears a suit cut from pale lemon yellow velvet, and a suede waistcoat with the ‘GG’s, which, according to GQ, was an original vintage piece stumbled upon in a costume house.

Unique statement pieces throughout the film such as his neck-kerchiefs and pinkie ring emblazoned with the G&G Logo, further define his aristocratic personality.

Our favourite film ensemble courtesy of Rodolfo Gucci is his checkered, forest-green suit. He wears it with a cashmere scarf, draping elegantly over one shoulder. He is clad in his famous thick-rimmed glasses, a style which his son Mauricio adopted. The look casts Iron’s character as unapproachable, with just a hint of loneliness.

‘The other woman,’ in Mauricio Gucci’s life, is given breath through the ever-chic, Camille Cottin. She has few scenes in the film, and her outfits are markedly more memorable than her dialogue. Editorialist writes that Paola is a Milan native who was a childhood friend of Maurizio’s, before reconnecting with him later in life, shortly after divorcing her first husband, Giorgio Colombo. The pair started dating officially in 1990, living together as a couple for five years until Mauricio’s untimely death.

Paola’s outfit choices throughout the film exude an unquestionable air of refined breeding, contrasting sharply against Mauricio’s wife, Patrizia Reggiani, famed for her extroverted and over the top fashion ensembles. Our favourite Paola look from the film is her classic high-fashion ski suit. It’s understated and effortlessly panache, matching Mauricio’s own ensemble, and immediately cementing her place in his world.

In a phenomenal performance by Jared Leto, the middle son of Aldo’s Gucci, is portrayed as a fashion outsider with outfit choices that border on kitsch. The character wears self-designed corduroy suits in the earlier scenes and eventually nylon tracksuits with neon prints that reached prominence in the late 80s and early 90s.

Datebook writes that Leto underwent six hours of daily prosthetics in order to morph into his character, who looks very different from the real-life actor. Paolo often appears in the movie dressed in shades of purples, his most notable suit selection is a crushed velvet three-piece in shades of lilac and lavender.

While every outfit Paolo wears is a fashion moment within itself, we can’t look past the nylon one-piece boiler suit he wears in the scene which sees him collect his father from prison. The vivid fluoro colours add a splash of humour to what is an otherwise, sombre and grim exchange between father and son.

One of the title characters of the movie, Mauricio Gucci (Adam Driver), begins as an amiable young man. Over the course of time, he grows into an arrogant and headstrong CEO. Then, he goes on to drive the Gucci label into financial ruin. Likewise, the fashion choices of Driver’s character begin as understated and unremarkable – becoming increasingly ostentatious as we witness his character’s rise to fame and power.

Although Driver’s character wears an elaborate display of expensive suits, his most outstanding look, like his lover, Paola, is his high-fashion ski look, on the slopes of St Moritz. Driver’s turtle-neck and white cable-knit sweater are on-point in defining an era of high-end, over the top fashion. Likewise, his thick-rimmed glasses, juxtaposing the slopes, effuses cool. The snowsuit tied around his waist tops off the look, a classic bookmark of 90’s fashion.

Famed as the ‘Black Widow,’ Reggiani is a personality larger than life. So much so, that the film’s director, Ridley Scott, chooses to tone down her character to make her more sympathetic with audiences. Buzzfeed reports that Lady Gaga, who portrays her, entered into an intense eighteen months of method acting during her portrayal of Reggiani, speaking only in her character’s Italian accent, and refusing to break character even when the cameras were off.

There have been numerous articles dedicated to the iconic outfits worn by Gaga’s character in the House of Gucci. She starts off subdued and sexy, growing more extravagant as the historical timeline continues, as the couple start to experience unlimited wealth. As Fashionista observes, although her outfits are overbearingly opulent, they tend towards the gauche, contrasting with the refined taste of the Gucci family, and casting her as the perennial outsider.

There are so many award-winning fashion moments in Gaga’s depiction of her House of Gucci character that it’s hard to choose just one. The most publicised look is her initial ski ensemble, in which she wears a white fur Cossack hat and gold chain accessories. Not your average snow day. This is not to outdo her studio 54 outfit, a sequin-bearing turquoise halter number. The outfit’s styling comes complete with chunky gold bracelets, necklaces and dangling earrings.

A true stand out is Gaga’s golden sequin dress, with its built-in Bvlgari necklace featuring amethysts, sapphires and diamonds. It’s a piece from the Bvlgari Heritage collection – playing up Gucci extravagance to the extreme.

The wedding dress Gaga wears in the film is a labour of love, taking ten weeks to create. With its cathedral veil and sweetheart neckline, the piece is Janty’s favourite design, the lace painstakingly hand-sewn. The fairytale outfit is far more extravagant than Reggiani’s original wedding dress; a floor-length, high-necked gown. Although Janty had an extensive replica made, the production team opt for the more flamboyant ensemble for the film.

Our favourite look of the movie is a red satin gown from the masquerade party scene. This is the first night she encounters Mauricio Gucci. The look also features black gloves and diamond jewellery. 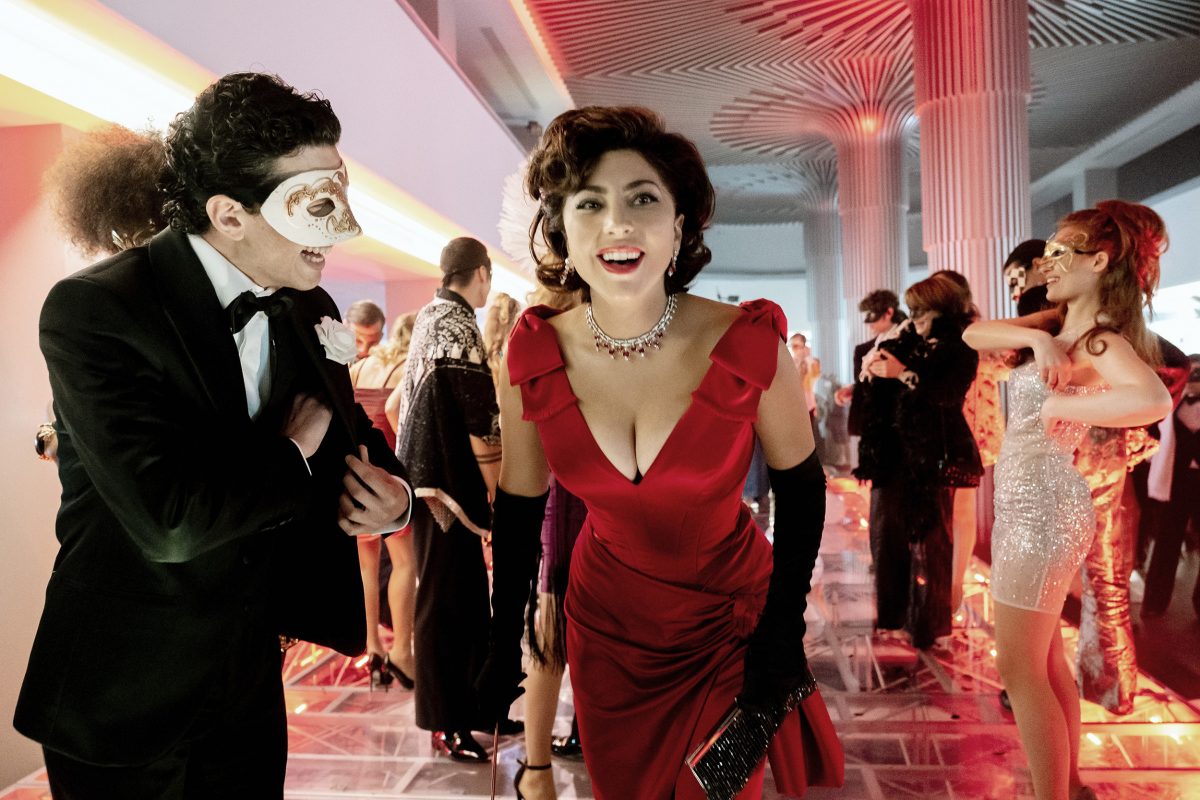 Credit: NBC NewsThe look is based on a similar look worn by the real-life Patrizia on the night in question. Although, the original is bright pink. Mauricio immediately takes to the Italian siren, believing her to bear a resemblance to actress, Elizabeth Taylor. Unlike the movie, he subsequently approaches her. The outfit portrays Patrizia in a naive and joyful light… Paving the way for the extravagant and flamboyant character she eventually becomes.