Skip to content
Emily in Paris has officially been renewed by Netflix, for both Seasons 3 and 4. And we can’t help but wonder – what’s in store for our over-the-top heroine? Will Emily go transcontinental to continue snogging Alfie? Or be tempted back into the golden arms of Gabriel? Will she remain loyal to Madeleine and the United States? Or will she join Sylvie, Julien and Luc, Viva the French Revolution? And most importantly, what’s in store for next season’s wardrobe? Join us as we discuss the endless possibilities for Season 3 of Emily in Paris.

EMILY IN CHICAGO OR PARIS?

We love Emily in Paris. Season 2 ended in a major cliffhanger as Emily was presented with the choice between returning to Chicago for a long-coveted promotion with the Gilmore Group, or leaving the company she has always been loyal to and joining Sylvie’s startup. The last scene of Season 2 has Emily in tears after going to confess her true feelings for Gabriel only to be confronted by the reality this his ex, Camille is moving in with him. Emily calls Sylvie to say she’s made her decision, and then the screen cuts to black, leaving us with potentially a long wait before we know her decision.

So what outcome awaits our brightly coloured heroine? Choosing Paris means a lot more than just a job, it means choosing France as her home not just for a gap year, but for the potential future. Returning to Chicago equates to giving up the glamorous new life she’s started building; including her two potential love interests, Alfie and Gabriel.

The show’s creator, Darren Star, isn’t giving anything away. He gives only a vague indication of how the show is set to move forward.

“I have a very strong idea [of what Emily chooses], and I think the thing is, there’s no right choice,”

A NUMBER OF DOORS

Star told TV Line in December 2021, “She has reasons to pick a number of doors at the end of season 2, and our challenge is deciding which of those doors she’s going to choose and why. That’s what season 3 is going to be about.” Before adding,

“When you live in a foreign country, one of the questions is, where’s your heart? Is it the place you came from, or the place you are at the moment? Emily is going to be struggling with that as well.”

So it could go either way, but realistically, the clue is in the name – Emily in PARIS. A show about Emily returning to live her former life in Chicago just doesn’t quite sit right, does it?

Furthermore, as reported by Variety, next season will shoot on the outskirts of Paris this spring or summer, although other destinations, including London, are being explored. A quick dash over the Chunnel would play in well with the storyline if Emily pursues a relationship with everyone’s favourite newcomer, roguish Brit, Alfie. Which leads us to…

EMILY WITH ALFIE OR GABRIEL? 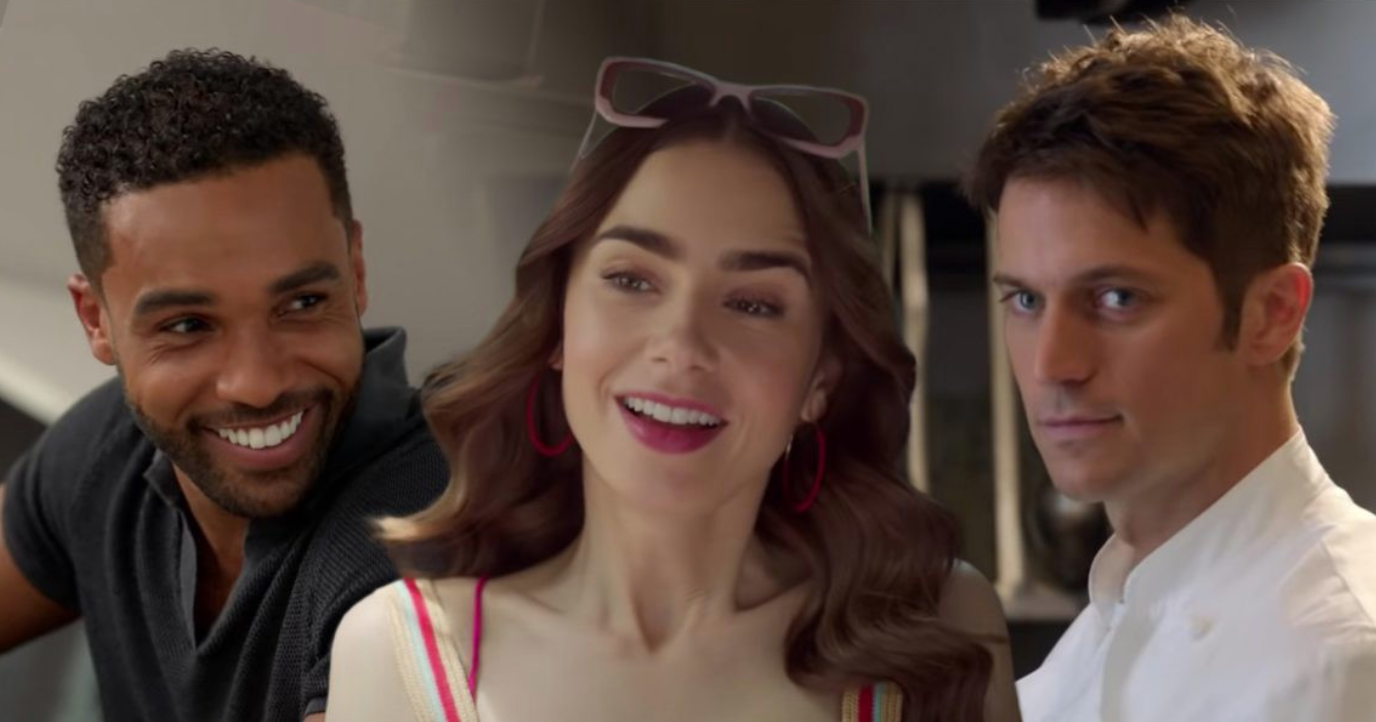 The close of Season 2 finds Emily embroiled in a complicated love square of sorts. Her relationship with Alfie was becoming more serious. And before he returned to London, he assured her he was committed to trying to make it work between them. After all, London is only a two-hour train ride from Paris. Imagine the romantic weekend strolls they’ll be able to take along the Thames, and bonus, she’ll be able to speak English!

However, moments before the finale, Emily reveals she was still in love with Gabriel to her closest confidante, Mindy. Unfortunately, she waited a little too long. Just as she was about to come clean about her feelings to her hunky French neighbour, she discovers he is back together with his ex-girlfriend, Camille.

So what does the future hold for Emily’s love life? Well, one thing’s for sure, Alfie is not leaving the series, or foreseeably, Emily’s romantic future, anytime soon. Netflix announced last Sunday during Paleyfest, that they have promoted Lucien Laviscount (Alfie) to series regular for Season 3 of Emily in Paris. The break out star has fast become a fan favourite, causing heated arguments on Twitter and Instagram between the Alfie and Gabriel Shippers.

So whether Emily cuts ties with Gabriel in order to really pursue something with Alfie, or continues to remain in a festering tangle of emotions with both men, one thing is for sure, the drama stakes will remain high!

In February 2022 Collins posted a behind-the-scenes video her instagram , which featured Patricia Fields and the Emily In Paris wardrobe, and wrote, ‘Woke up thinking about this magical closet. Can’t wait to get back to work on @emilyinparis with this living legend, @patriciafield, the incredibly inspiring and innovative @mshangaimx, and their amazing team!…

Say what you will about the storyline, the fashion is one of the most-discussed parts of Emily in Paris. Stylist Patricia Fields, and Costume Designer, Marylin Fitoussi, continually deliver looks that resemble a high-end couture shoot from the pages of Vogue.

Whether it be the unrealistic extravagance; (think 20-something’s in an endless array of designer and vintage outfits), Julien’s bold splashes of colour, Camille’s understated chic ingenue, or Sylvie’s essence of je ne sais quoi; Whatever it may be, numerous digital traffic is dedicated to the best looks from every episode.

“WE DON’T CARE ABOUT REALITY”

Costume designer,  Marylin Fitoussi, tells Elle, “I learned a beautiful thing from Patricia,” in regards to designing looks for the show. “Every morning, she said, ‘Marylin, don’t care about reality.” She goes on to explain, “When I started to design season 1, I was thinking too much about, for example, Mindy: ‘Oh, she’s a nanny. So she needs to run after the kids in a park, so she needs to have sneakers.’ When I designed Mindy with sneakers, I saw Patricia looking at Darren and he was saying, ‘What is going on? Sneakers?’ It’s something that can’t happen in Darren’s world. They said, “Marylin, we don’t care about reality.” So [now], I completely understand their world.”

Fitoussi continues to explain that although Emily becomes more ingrained within French culture, she remains loyal to her own style.

“[She doesn’t] give up and became a boring French girl with a navy blue blazer jacket, a white T-shirt, a pair of jeans and sneakers.”

As for what’s next in Emily’s fashion future, Fitoussi reveals she already has plans for season 3. If all goes to the Costume Designer’s plans, she’ll be giving Emily and the cast’s wardrobes an eco-friendly refresh. “My dream for season 3 would be to recycle costumes [from] Season 1,” she tells Bazaar. “I don’t know if we can do that, but I’m dreaming to bring some of Lily’s most iconic outfits to the recycling workshop and see what they can do and recut and make.”