This season, highly influential designer Thom Browne offers his personal answers to the existential questions facing American fashion. His latest Fall collection shifts into a new age of gender values. Sustainability is also high on the priority list, serving to define the future of American fashion.

So how does Browne relate his clothing to a shifting American identity? The unisex designer offers his unique interpretation in a runway show that screams theatre as much as it does fashion. Held in New York, it came weeks after the end of the official season to coincide with the 2022 Met Gala. The brilliant spectacle is not only a celebration of individuality. It is also a love song to the diverse people who represent New York.

Browne’s latest collection honours the eclectic souls of New York. It pushes the boundaries as it soars far beyond the status quo of the traditional runway show. The show was staged as a toy store inside the Javits Center’s exhibition hall. And the initial line-up was presented as a ‘Ted Talk’, led by model Rocky Harwell – dressed as a Thom Browne teddy bear. He presents to an audience of 500 stuffed teddies, all clad in identical classic grey Thom Browne suits.

The toy bears were placed on tiny chairs lined up in straight rows within a conference-room-inspired setting to hear a motivational “Teddy Talk” led by the “Chairbear,” in charge of educating the bear audience and real-life human guests on the merits of finding one’s authentic self. The Chairbear told guests over a soundtrack that the bear-filled audience had been lost in New York until they came to Browne’s toy store “to find their true selves.”

The marked juxtaposition of the brightly clad designs against the idea of conformity represented by the traditional suit was repeated throughout the show, with Browne later writing on one of his Instagram posts:

The show, as reported by Vanity Fair, opened with a speech; featuring a disembodied voice from the speakers, saying, “New York, where you come to find yourself. “an island of misfit toys” — that is, a home for the square pegs, the weirdos and dreamers, the individuals that chafe against the blandness of the crowd. A place that gives them the freedom to find their bliss, to embrace their “true self” and let their freak flags fly. Where citizenry is a state of mind rather than a happenstance of birth. A lifelong search, a lifetime of questions, asking and searching, to find their true selves,” and ended with the advice to “always be true to yourselves”.

A Spectacle of Otherworldly Silhouettes

The presentation draws inspiration from the Island of Misfit Toys from the 1964 stop-motion animation “Rudolph the Red-Nosed Reindeer”. The runway parade hosted a fanfare equivalent to a Disney spectacle. The show was full of Browne’s specific, slim-fitting tailored blazers, unusual oversized silhouettes. Unique in its unisex offerings, the collection includes men’s skirts and suits tailored to both men and women. The models wore tweed tailoring and silk Mogador jacquards in collegiate colours paired up with their own version of the ‘toys’; who sported more otherworldly silhouettes.

“I wanted it to be a good conversation between the two, because I do feel it is an amazing time, when people can be true individuals,”

the designer tells W Magazine, after the show, “I wanted that to be the story.” 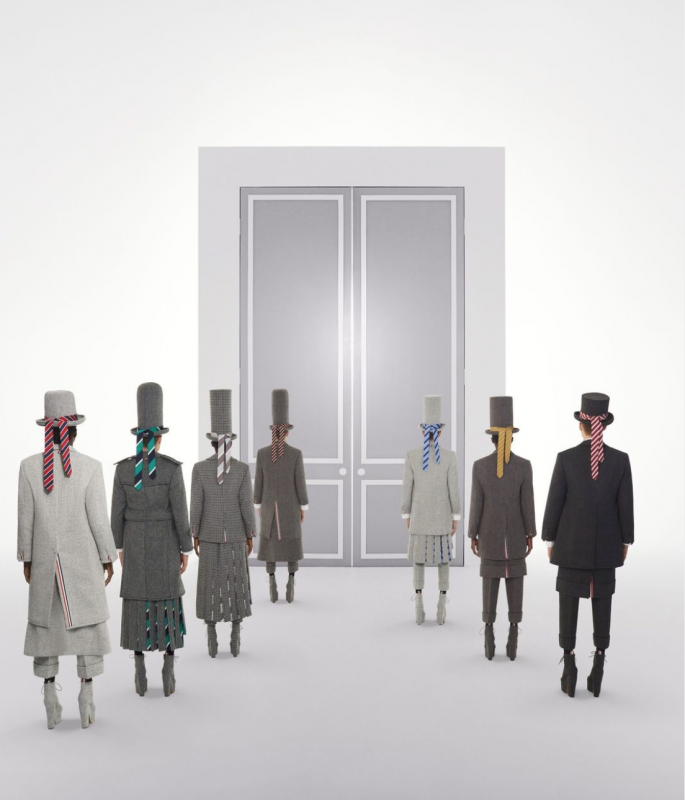 Thom Browne posted many images of the show to his official Instagram account, with comments indicative of his mental process throughout the creation of his latest collection. He writes  of the design below:

Twenty-five models followed, sauntering the runway, dressed as toy versions of their predecessors. The wild ones wore labelled signs marked ‘toy’ while the more reserved looks donned the word ‘adult’.  Browne explained the juxtaposition of the two, as the wonderful world he’d created representing the spaces in between imaginative, dreamlike states of opposition.

The ultra stylised toy collection utilises a mesmerising pastiche of mixed materials to piece together unlikely shapes of favourite children’s toys. These include jack-in-the-box, Slinky, Raggedy Ann, and the classic wooden coloured alphabet blocks, which were used as purses and platform shoes. Bags came in forms such as a mind-bending recreation of dachshund dogs, teddy heads with legs, and rag-doll patchwork creations.

Hairstylist James Pecis created otherworldly balls of hair that sat high on the models’ heads and formed unique toy-like sculptures. In observation of his theme, Brown tells WWD, “I always feel like New York is the Island of Toys and everybody comes here to find themselves or create themselves.”

The date of Browne’s fall 2022 runway is also significant. It took place the Friday before the Costume Institute at the Metropolitan Museum of Art opened the second part of its expansive exploration into American style, “In America: An Anthology of Fashion” on May 5.

The exhibition, a sister to the currently running “In America: A Lexicon of Fashion,” explores American fashion legacies using the museum’s period rooms as sets for dialogues about race, gender, community, and craft.

Browne’s partner, Andrew Bolton, is a front-row staple at Browne’s shows and has curated both American Fashion exhibitions at MOMA, as he currently holds the prestigious position of beings the Wendy Yu curator in charge of the Costume Institute.

“It is important for me to continue our celebration of American design and support Andrew’s second exhibition on American fashion at The Met,”

Browne says, as reported by Vogue. “There is so much individuality and creativity behind American design. The CFDA’s American Collections Calendar is designed to support American designers to show when and how is best for them.

Browne had boldly pushed forward with his vision, undeterred by convention.

“I think it’s important to remember—whether it’s a skirt or whatever it is—if you want to wear it, why not? You should just do it regardless of what anybody thinks.”

The designer tells Vanity Fair. “That’s really the message of tonight’s show. It’s just being true to yourself and being confident in just being your own self. It is easier said than done, but it’s important that you eventually, in your life, do find yourself.”

And indeed, the latest collection continues to move fashion toward a world where gender neutrality is commonplace, unlocking a realm of imaginative possibilities of what’s possible for the future. The critical reception for the groundbreaking show was overwhelmingly positive from the fashion industry and celebrities alike, with famous personalities such as Selma Blair writing on the designer’s Instagram images of the event,

“This is heaven for me. Just Heaven.”

The fall collection is further proof that Browne, continues to transcend fashion. His imaginative presentations and designs push the boundaries and break down long perpetuated stereotypes of what is acceptable in the realm of popular culture. The New York Times wrote, “Sometimes a show is just a way to sell clothes, but sometimes it is a whole camp intellectual discourse.” While we can’t predict what’s next, what is certain, is the talented designer will continue to question traditional modicum through his garments, while retaining an aesthetic that celebrates individuality through style.