Who doesn’t love a good binge session? Whether it’s rain or shine, sometimes there’s nothing like lazing in your jammies and firing up the Google Chrome Cast to stream your favourite series.

From brilliant to basic we round up some of the best shows to devour on a lazy afternoon. Read on to check out our top 5 list of must-see’s during the rainy season…

Are you looking for a laugh out loud drama with a light pace? This is a show with a fantastic storyline. Featuring dazzling scenes of vintage New York, you can’t go past “The Marvellous Mrs Maisel”.

Amazon has put out the final season four episodes of this multi-Emmy award-winning series – and boy, does it wash down a treat. Whether it be the impeccable set design of the 1960s period piece, the breathtaking costumes or the insanely delectable banter of Midge Maisel’s incredibly neurotic family, everything about this show makes for addictive watching.

Season four follows a disillusioned Midge (Rachel Brosnahan), moments after she is freshly dropped from her gig as the supporting act in the European leg of the Shy Baldwin tour. We watch as she navigates the brutal show business circuit in her native New York, along with her ever wisecracking agent, Susie (Alex Borstein).

It’s an up and down journey, but the supporting characters more than fill the gaps during the weaker moments of the plot. Midge’s mother, Rose, (Marin Hinkle), effortlessly steals every scene she’s in. The secret romance between Midge’s ex Joel (Michael Zegen) and the daughter of a Chinese gangster family, Mei (Stephanie Hsu) is unexpected and fun to watch. And once again, the electricity between Brosnahan’s Midge and Luke Kirby who plays real-life comedian, Lenny Bruce, is hypnotic.

The Marvellous Mrs Maisel is streaming on Amazon Prime. You can watch the Trailer here:

A political drama, peppered with frequent moments of acid wit, “Succession” is rumoured to be based roughly on the Murdoch family, with elements from the show inspired directly from other dynasties (Disney, looking at you). “Succession” centres on the Roy family, the dysfunctional owners of Waystar RoyCo, a global media and entertainment conglomerate.

It follows Logan Roy, a maniacal dictator, and his four offspring as they fight for control of the company amid uncertainty about their father’s health. The series shows human dysfunction at its worst, and allows a dark glimpse into the lives of a wealthy elite so removed from reality that they almost operate in an alternate universe.

“Succession” is a slow burn, and takes a little time and investment to really get into. But the payoff is phenomenal. The value of the show is in the details. The main characters exemplify quiet success” – nothing about them is showy, but the fashion on the show has amassed its own fandom of 20,000 followers on Instagram.

Plain baseball caps, navy turtlenecks, and luxury pieces that don’t scream money, while easily costing upwards of $10,000USD a piece. The show exudes understated wealth. There are the other moments, servants in the background, always nameless, disposing of an untouched family meal of lobster and caviar because there was a strange smell in one room of the house.

The daily power plays, manipulations, and true ruthlessness of the human condition. And the cinematic timing is perfect; awkward, filmed documentary-style, completely immersing the viewer in the moment.

A darling of critics, although only starting to acquire mass popularity, this is a the show to watch if you want a real think piece, you’ll come back to time and time again.

Succession plays on HBO and is viewable on Binge. You can watch the Season 2 Trailer here:

Let’s face it, sometimes after a big night, we’re all in the mood for something frothy, that doesn’t require much concentration. Well, “Selling Sunset” has us covered.

As you progress through the series, you inevitably become absorbed by the bitchy plotlines between the unworldly real-estate agents on the smash Netflix series. There’s Team Chrishell, the doe-eyed ingenue, former wife of Justin Hartley, and her gang of mean girls. And Team Christine, the show’s ‘super villain’ who actually portrays ballbusting femme fatale at its best. I’m Team Christine in case you didn’t guess!

Netflix has recently released the latest season of the glitzy reality series, along with its usual array of jaw-dropping real estate, celebrity cameos and random character subplots. Season 5 actually delivers some insightful moments from Realtor newcomer Chelsea Lazkani who dominates her scenes. At one point she completely commands the room with a powerful address when she observes,

“When I hear everyone coming at one person it’s giving me bullying. And even when you may not vibe with her, and dislike her, when you all come together, it’s a lot.”

Whether you love or hate the characters, one thing is certain, the frothy series makes the perfect binge for a hungover Sunday morning!

“The Morning Show” features a brilliant cast of actors so A list, you would barely expect to see them at an awards ceremony together, let alone featuring on an ensemble show. The show follows fictional news anchors, Alex Levy (Jennifer Aniston) and Bradley Jackson (Reese Witherspoon), and a phenomenal supporting cast, as they host the UBA Morning News. The series covers news events so current that there were several instances, production stopped, and the script was rewritten, so as to remain relevant with actual breaking news.

Season 1 navigates the #METOO movement, portraying the moment Alex’s Co-Host, Mitch Kessler (Steve Carrell) bring fired after sexual harassment charges, and the ensuing landslide that occurs. It incorporates many real-life events throughout the fictional drama, such as the California wildfires and the Las Vegas mass shootings. It incorporates them in such a way, the viewer feels completely immersed in the story.

Season 2 follows the day to day lives of the original characters against the growing chaos of the global pandemic, allowing the coronavirus to unfold and filter into everyone’s lives with the same paranoia as we all ourselves truly felt.

The show’s accurate depiction of Covid at the start of 2020 literally brought chills to me. And although it may be too soon to watch a re-enactment of something still wreaking low key havoc around the world, I found it strangely comforting to see this fictionalised portrayal of our lived experience.

Despite what the lead characters (Aniston and Witherspoon) would naturally have you assume, “The Morning Show” is not a comedy or a light show. It’s very often dark, and aims straight for the core, spotlighting a raw loneliness in society, that I was not expecting. But it’s a show that leaves you thinking far after you turn it off.

The Morning Show streams on Apple TV+. You Can watch the trailer here: 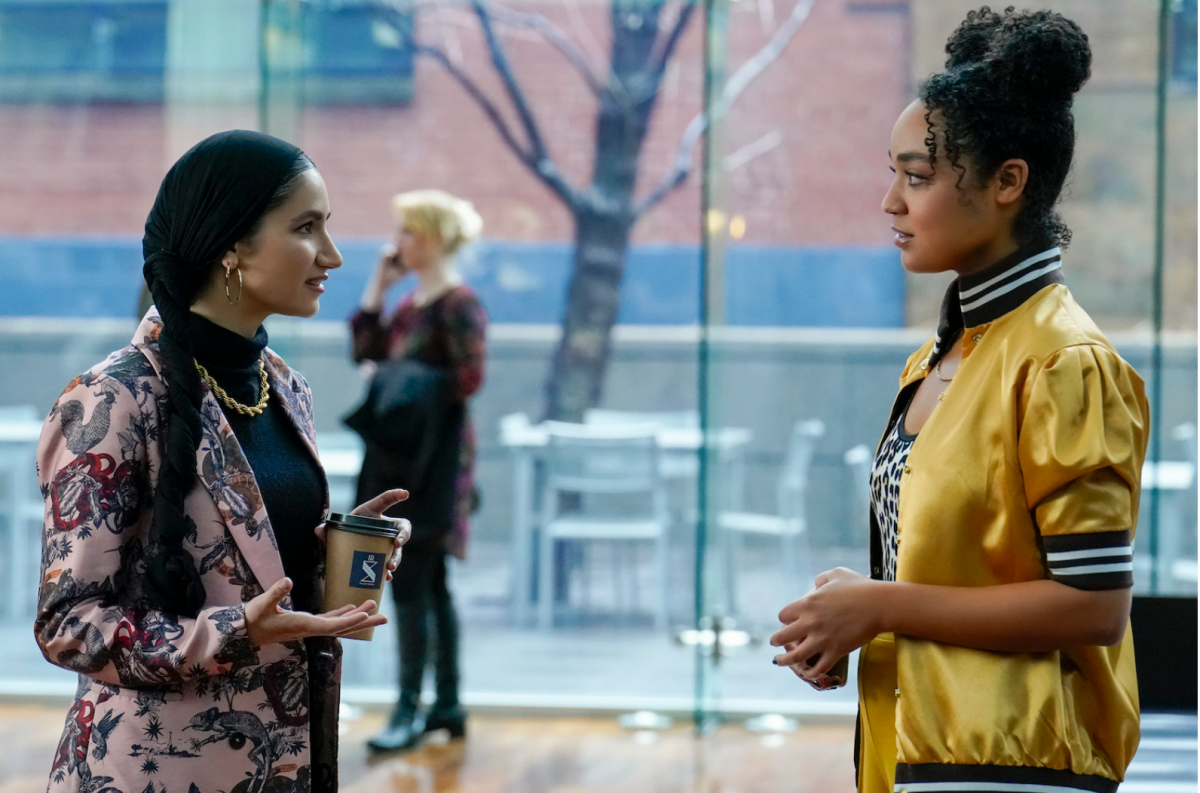 If “Girls” met “Sex in the City”, and reproduces a slightly more evolved offspring, it would probably result in “The Bold Type”. Instead of narcissistic women in their twenties who cut each other down, or insecure women in their thirties, desperately seeking a man, “The Bold Type” features a group of well dressed late twenty-somethings supporting each other, and fighting for some big social justice campaigns.

“The Bold Type” is inspired by the life of Cosmopolitan editor in chief, and largely follows lead characters, Jane, Kat and Sutton, in their day to day lives as a writer, stylist and content producer, respectively. The series is fun, and filled with fashion, but also explores some surprisingly deep topics including immigration, diversity and the glass ceiling.

Each character faces deeply personal struggles –  Kat learns she is bisexual, as she falls in love with a Palestinian photographer. Adena faces deportation. Sutton deals with intimacy issues resulting from a neglectful and alcoholic mother. And Jane undergoes a double mastectomy; upon learning she has the BRCA gene, which her mother died from.

It’s an easy show to watch, while also remaining relevant, and being surprisingly moving. Definitely, something to watch with the girl gang.

“The Bold Type” streams on Amazon or Stan. You can watch the trailer here: