The collection we never envisaged and the one we didn’t realise we needed until now. Blending Jacquemus signature style and the innovative excellence of Nike, the exclusive collaboration is about to redefine summer RTW as we know it.

The collection which is set to drop on June 28 on Jacquemus website is bound to be a pleasant surprise. Each of the brands only revealed very minimal info thus far. So that leaves us, the fashion fanatics and collab lovers to get guessing.

The vintage-inspired summer collection has apparently been three years in the making. ‘Sensuous details and neutral colours’ are the imagery in mind. Sounds exquisite to me.

“I have always been inspired by vintage ACG pieces and Nike campaigns from the 90’s”.

Jacquemus has also emphasised the importance of creating a collection that is accessible ‘for all bodies’ and displays the perfect ‘mix of Jacquemus style and Nike performance’.

It’s no secret that Jacquemus loves a muse. They like to reel in the big names for their campaigns. In the past, Kendall Kenner appeared in the ‘Le Montagne‘ campaign. Bella Hadid and Barbie Ferreira revealed ‘Jacquemus at Home‘, literally shot over facetime. So why wouldn’t they call in any other than Sydney Sweeney, another Euphoria queen? Well, she really did model a sensational sneak peek of the collab in picturesque Hawaii. Just like Bad Bunny did, when he starred in the ‘Le Splash’ campaign in February 2022. Both shoots aren’t short of summer vibes from Hawaii, it just so happens that this time around, Sweeney’s perched upon a motorbike instead of rollerskates! Credit for the creativity Jacquemus, you really don’t fail to adapt!

Kendall Jenner posed for Jacquemus Winter 2021 Campaign, ‘Le Montaigne’ and it was super fun and fresh. The stunning model posed boldly in front of bright red and blue backgrounds, in hammocks and off ropes. Daring and different, the campaign captured by Drew Vickers and striking poses directed by Ryan Chappell bought it all together. The range of colourful numbers appeared amongst outdoor-themed apparel and a cabin-like setting. Hiking boots and big ol’ puffer jackets set the scene immaculately.

A little different to the high definition photos we are used to, this campaign captured the essence of home, during COVID-19 on facetime. And Bella Hadid, Barbie Ferreira and photographer Pierre-Ange Carlotti did the theme major justice! Jacquemus Spring 2020 collection was playful and laidback, a mood Hadid mimics. She sports rectangular lucite sunglasses, bodysuits, little crops and white suits. One image of the series reveals Hadid entirely nude, concealed by Jacquemus iconic mini top-handle bags. The DIY approach is something a lot of us have become accustomed to during the pandemic. I don’t think it’ll be unusual that we’ll soon see smaller fashion houses follow lead. Jacquemus trend sets and so does Bella Hadid!

Barbie Ferreira also rocked the SS20 ‘at home’ campaign. A series of knitted bikinis, semi-see through shirts, a buttermilk yellow pleated dress and a new signature Jacquemus XXXL wide-brimmed hat made a mark on the video chat shoot. Barbie’s inclusion in the campaign is a welcome step towards more body diversity. We hope to see more of this in photos to come for the Nike collaboration and on the runway!

Another thing Jacquemus does well is pop-ups! And don’t we love them! The installations hit the streets in Paris in December 2021. Inspired by vending machines and bright pink hue highlighters, the experimental store ‘Jacquemus 24/24’ was filled with exclusive pieces for 24 hours!

Months later, Simon Porte Jacquemus announced that the iconic pop-up was coming back and it would be taking on Milan. And it did, back in Feb in the beautiful location of Palazzo Clerici. Items available in the modern all-white colourway pop-up included the La Vague bag, the iconic Bambino and the Sweatshirt Brodé. Fancy stuff!

Simon Porte Jacquemus commented in an Insta story about the pop-up store format.

“It’s not just about buying: it’s also an experience, a concept. The idea is to break the frontiers in the world of luxury. We want you to come in feeling welcome and have a great experience no matter what you do inside, you can also just walk in and take a picture. This is Jacquemus…”

But wait there’s more! Why occupy two fashion capitals when you can have three. A series of surrealist pop-up installations opened at the London Selfridges department store in May. The installation, which is blue, occupies a number of locations across the store. Now you’re probably wondering why it’s surrealist? Well, Jacquemus decided he would create the pop-up to be an interpretation of his own bathroom! So basically Selfridges occupies Jacquemus’ bathroom, crazy! This one doesn’t just include a luxury vending machine filled with bags, it also has a swimming pool changing room. Just when you thought, it couldn’t get any better. It really is a sight, so I couldn’t help but spam this article with photos. 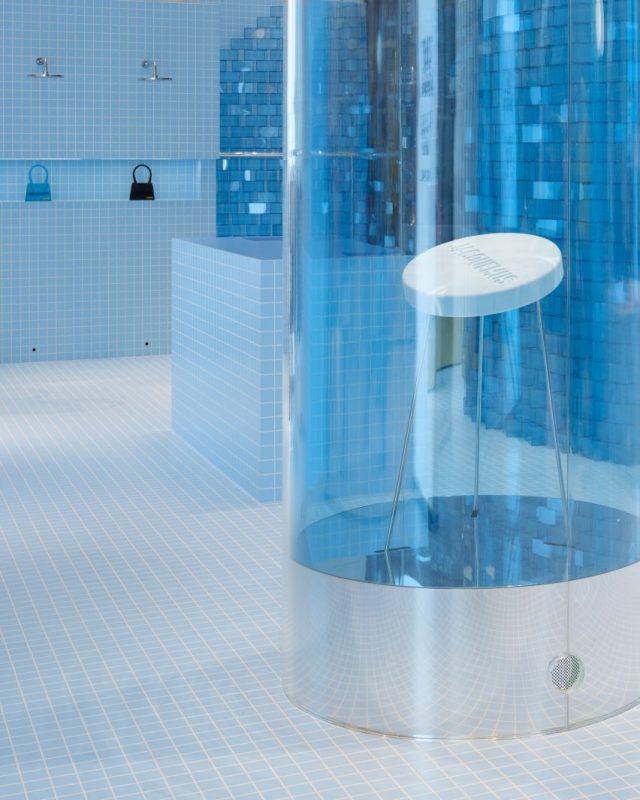 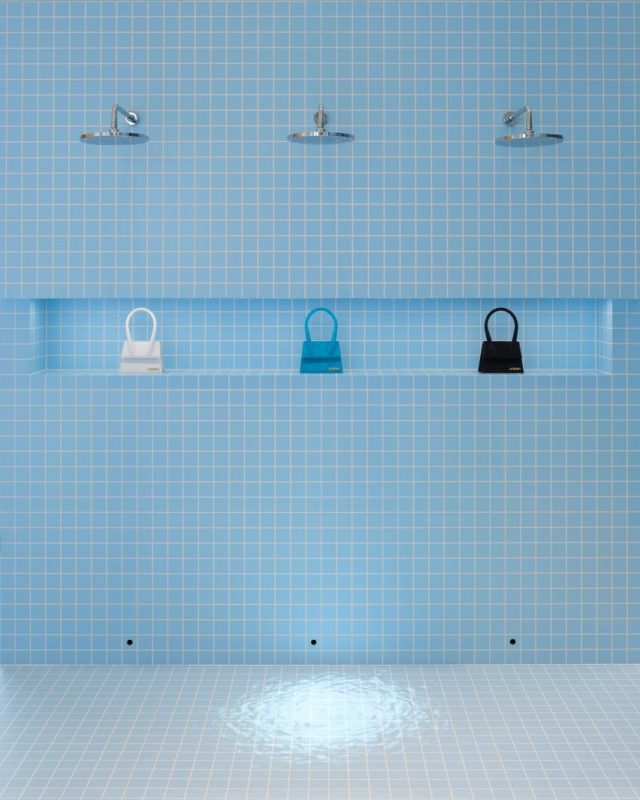 If you’re in London, you’re lucky, there are still 3 more days to experience the wonder of Jacquemus pop-ups, even if it’s just for a photo!