Amber Heard didn’t come out victorious in the Depp v. Heard trial. She might be losing even more than that.

Last week, finally got closure on the Johnny Depp-Amber Heard defamation case. Heard has to pay Depp $15 million in compensation and punitive damages. Heard will also be getting from Depp $2 million in damages.

During the trial, Heard admitted that while she had to fight to reprise her role in Aquaman 2, she was able to film this Fall for the movie. She said that they “took a bunch out” of her role. She was given multiple versions of the script, each time with a lesser role. This is, of course, still better than what happened to Depp: losing his role in franchises like “Pirates of the Caribbean” and “Fantastic Beasts”.

IS SHE GOING TO BE IN THE MOVIE AT ALL? 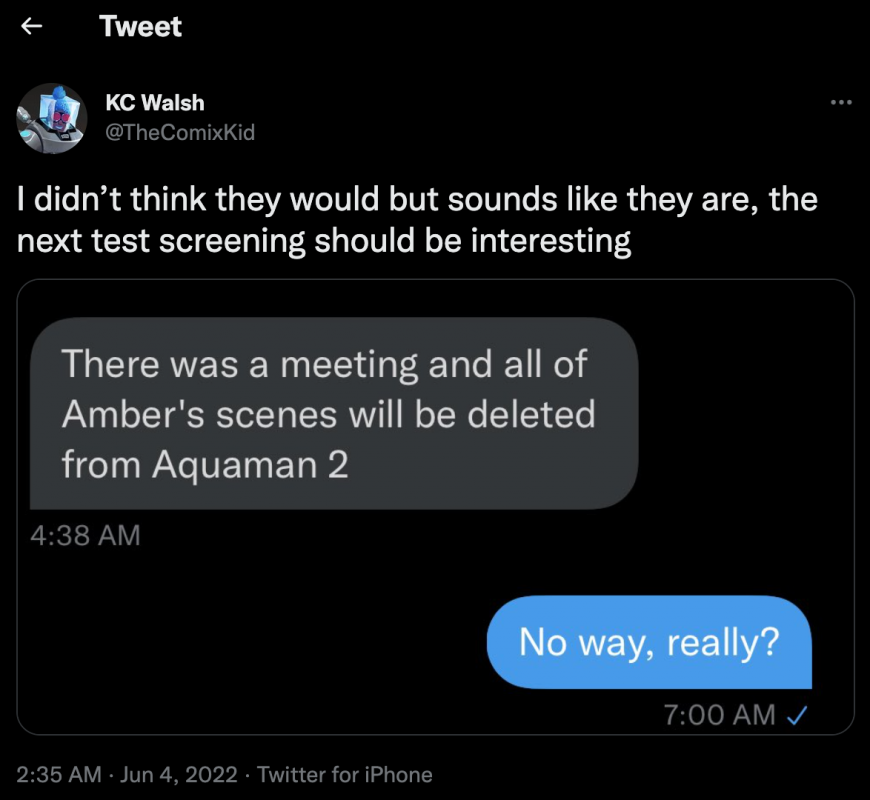 According to reliable source KC Walsh, Amber Heard might not appear in the movie at all. She talks about an alleged Warner Bros executives meeting where they decided to cut her from the film. This is apparently not a definitive choice as they will check the audience’s reception to these changes at trial screenings.

IS HER PART NECESSARY?

Heard’s character had a prominent role in the first Aquaman. Clearly, Warner expected her character to be essential to the DC Extended Universe franchise. This is why these test screenings will determine whether Warner Bros. goes through with these changes. The goal is allegedly to have her character die off-screen in childbirth, and while production had wrapped up, there might be a need for reshoots to make her “disappearance” more acceptable.

WHY GO TO THE TROUBLE?

Warner Bros. wanting to diminish her presence in the movie as much as possible is understandable given the trial’s outcome. It truly means that they believe her presence might hurt the film at the box office, if they are willing to go through so much trouble this late in production. Another interesting reason as to why they are seriously considering is the press tour? Having Heard promoting the movie on talk shows and giving interviews might not be what people want to see at the moment.

Aquaman and the Lost Kingdom is set to premiere on March 17, 2023. We should know relatively soon if Heard will appear in the movie.