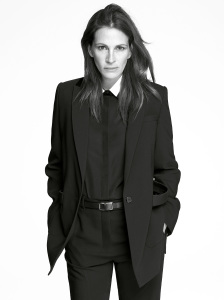 Praise to Riccardo Tisci – he has found the right face for his latest design work. For Givenchy’s Spring/Summer 2015 collection, Tisci chose Julia Roberts as the muse and was “happy shocked” when she said yes to his proposal to become the campaign model.

Julia Roberts, now 47, has had plentiful interviews and appearances, but has never once personally revealed her life on social media. This publicly quiet personality was what made her a mysterious, elegant star of the world. She has been everything from young, wild and pretty to sexy, feminine and religious.

Roberts is no less a “super-model” than any other to Tisci.

“Today, celebrity has become so much [about] how many followers you have, how big you are on Facebook. For me, she represents a pure talent and a pure beauty.”

This is why Tisci specifically requested her face to be completely naked. To reflect Tisci’s serious yet sensual style, Roberts stares into the camera with no hint of amusement, wearing no make-up. Her hair was left just the way she came in to the site for the photo shoot, too.

Tisci admitted that he choose campaign models by personally rather than by their fame and popularity. And he likes “strong women” to be his models.

Her history and list of cinematography on IMDB shows us enough to admire her. She had and has the right amount seriousness and the right amount of glamour in her life that makes Givenchy fit her perfectly.

Who else would look more natural in Givenchy than Julia Roberts? It seems as if Tisci designed the clothes for her.