Hedi Slimane leaves Saint Laurent and Raf Simons transfers to Calvin Klein – 2016 had already been a big year for changes in the fashion luxury industry. And the end of unexpected developments seems to be still far, far away…

Five days ago, Simons announced one of his first major adjustments as Calvin Klein’s co-creative director: The change of the brand’s logo, which as he sees it, should showcase, “a return to the spirit of the original. An acknowledgment of the founder and foundations of the fashion house. In collaboration with the art director and graphic designer Peter Saville.”

Givenchy’s Italian head designer Riccardo Tisci unveiled he would leave the French house after 12 years of working as its creative director. The brand’s AW17 menswear show is set to take place in two weeks and it seems like this will be Tisci’s last one. However, rumors already said that Tisci would head to Versace – but who believes rumors?

As a tribute to his long-lasting tenure at Givenchy and the beautiful, though dark romanticism he brought to the band, accompanied by innovation and forward-thinking designs, we want to relive 10 things that we loved most about his work…

For Givenchy’s AW11 womenswear show, Riccardo Tisci cast his long-time personal assistant Lea T, who then became one of his major muses and modeled for another seven following shows, besides starring in two campaigns – one of them was his latest SS17 campaign. But Lea wasn’t only his assistant; Tisci revolutionized the runway with integrating her as one of the first transgender models.

Shot by photography duo Meet and Marcus, Julia Roberts was the star of Givenchy’s SS15 campaign, represented in a very natural look, but with a quite neutral, almost angry face expression. Tisci said in an interview for style.com:

“I said to her, ‘Because your smile is so beautiful and everybody knows you for that, I think it should be no smile.” – He definitely created a Julia Roberts that we hadn’t seen like this before.

His Love for Graphics 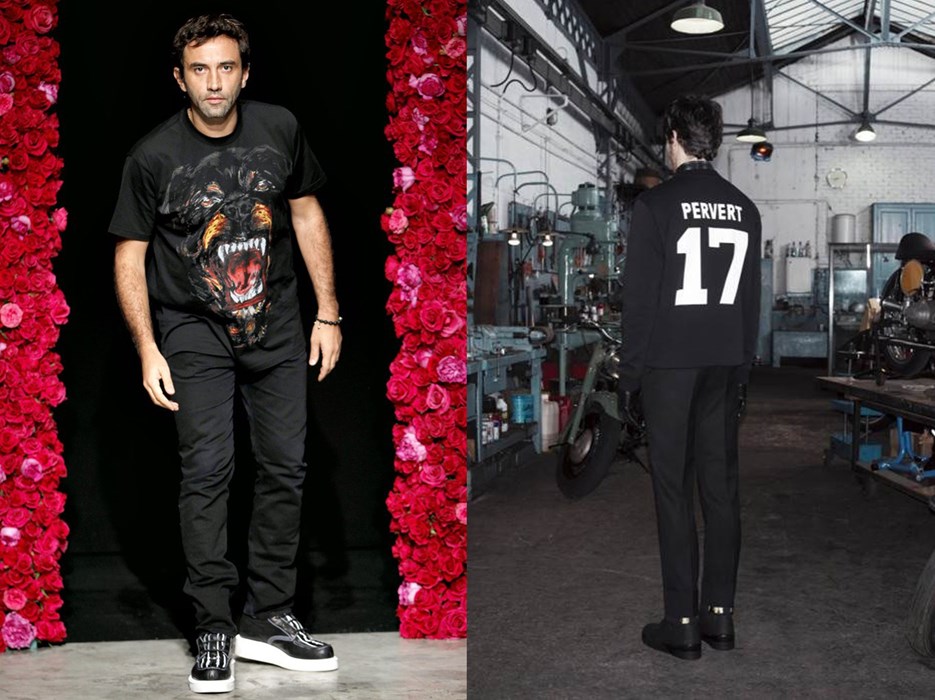 Another thing we loved about Tisci was his fable for street-style inspired looks with graphics, such as the “Rottweiler” design for the SS11 collection, or the “Pervert 17” shirt for Pre-AW13, not to forget about his Bambi graphic for AW13, which, back then, caused a massive hype. Graphics have never been that high fashion!

Tisci on Dazed&Confused’s Cover for their 20th Issue

In October 2011, it wasn’t Tisci’s newest collection that was shown on Dazed & Confused’s 20th cover – it was the designer himself, sitting on a perfectly shaped stone in a basic shirt, wearing Nike sneakers, while holding 2 naked women in his arms. The picture was taken by Matthew Stone and styled by Dazed’s former fashion director Katy England, who has styled Givenchy’s shows since 2012.

For a long time, the picture of Kim wearing her Givenchy wedding dress was the most-liked image that Instagram had ever seen with a current number of likes of almost 2.5 million! Probably one of the most celebrated – and expensive – wedding dresses of all time!

We already named it: Probably, Tisci will head over to Versace – although the house of Givenchy keeps denying the rumor. Keeping that in mind, we can only think of one more successful campaign – the one featuring Donatella Versace herself. In Givenchy’s AW15 campaign, Tisci chose to get another designer to pose in the brand’s new collection:

“I approached my friend Donatella because she represents what a fashion icon is to me,” he said. “We thought it was time to break boundaries and give a strong message about how to think fashion.”

Another on-point-campaign, shot by Mert and Marcus, featured soul icon Erykah Badu in Givenchy’s SS14 campaign – one that combined an urban Hip Hop look with Old English fonts… A never-seen-before design that was totally on point.

Tisci loved to celebrate his connection and friendship with strong women, such as Marina Abramović – or Erykah or Donatella or Lea or Julia – within his campaigns. So it came that Yugoslavia-born performance artist Marina got to art direct his SS16 show in New York – a show that had an audience of over 1200 people.

The designer brands fashion gangs, such as Balmain’s #BalmainArmy, or the Givenchy gang, rule the fashion world with their presence. Tisci’s group of his favourite muses included, besides Lea T and Naomi Campbell, big time models such as Irina Shayk, Joan Smalls and Mariacarla Boscono; a crew that featured a variety of different types of models, as Tisci unveiled in an interview with style.com:

“People can be so avant-garde, so advanced, but actually not, because people are still making differences between skin colour.”

Tisci was famous for trying different collections of jewelry pieces, especially, for his oversized range of septum rings, glamorously covered with crystals and pearls. The new designs were unveiled first in his SS12 show, and ever since, appeared in a series of his following shows.

A long time passed quickly, and Tisci proved his outstanding skills by creating a lot of diverse collections, inspirational ads, and designs. Where will he go from now? And who will take over the designer house after he’s gone? The news stated that American designer and Off-White founder Virgil Abloh is being considered for the freshly announced creative director position… Any other applicants? Future will show!