Developed in the mid-1800s for the sole purpose of displaying and selling clothing and accessories, fashion photography has since morphed into a complex genre of photo-taking that tells a story; reflecting a distinct lifestyle and mood via a photographer’s manipulation of subject(s), location and props. But for every photographer who revels in the beauty of gloss and glamour and stakes themselves firmly in the realm of commercially acceptable photography, there lies an artist who defies the industry’s prevailing codes and motifs; pushing the limits between fashion, art and shock value.

While many of these photographers have been criticised for taking their vision to a point where art and fashion are almost indistinguishable from pornography and exploitation, other critics laud their daring efforts. The industry is filled with these innovative image-takers, so we’ve compiled a list of ten photographers who we feel have withstood the test of time in transfiguring the role of fashion advertising through arresting social commentary and thought-provoking visuals.

Mert and Marcus is the working name of two fashion photographers (Mert Alaş and Marcus Piggott) who work together on a collaborative basis. Some say their work and style is influenced by the photographer Guy Bourdin and have pioneered the use of digital manipulation within their field.

The team has worked for such magazines such as Vogue USA, Vogue Paris, Vogue Italia, Interview Magazine, The Love Magazine, W Magazine, Pop Magazine, Numéro and Arena Homme Plus. Some of their major clients are fashion labels such as Dolce & Gabbana, Dior, Louis Vuitton, Missoni, Giorgio Armani, Roberto Cavalli, Fendi, Kenzo and Miu Miu. They have created the images for perfume houses such as Gucci, Yves St Laurent, Givenchy and Lancôme.They are often cited for using racy themes and controversy in their ads.

The campaign that attracted the most ire depicted the simulation of a gang rape. How this was supposed to help position the brand is anyone’s guess. But it did get a lot of extra publicity. But is any publicity, good publicity as has been espoused?

German-Australian photographer Helmut Newton (née Neustädter) is one of fashion’s most revered and iconic photographers. Born in Berlin to Jewish parents, Newton fled Nazi persecution in the 1940s, settling in Australia and gaining British citizenship and changing his surname to Newton in 1946. A photographer since the age of 16, Newton quickly established a name for himself as a fashion and portrait photographer in Melbourne, winning a commission with Australian Vogue in 1956 before establishing a relationship with the magazine’s British, French and German counterparts.

One of the fashion industry’s most divisive figures, Terry Richardson has been causing controversy since his very first campaign shoot for Katharine Hamnett in 1995; which saw barely-legal models wearing short skirts that revealed their pubic hair. Richardson’s heavily sexualized, almost amateur-level photography has been used by everyone from Supreme and Tom Ford to GQ and Rolling Stone, starring seemingly every A-list celebrity under the sun; be it Rihanna or Barack Obama.

Allegations of sexual misconduct have followed Richardson throughout his 20-year career, with many models accusing the photographer of coercing them into performing sexual acts during their shoots – or even with the man himself. His creepy persona and tarnished reputation don’t seem to have harmed his career, though; Terry Richardson remains to this day one of the industry’s most high-profile and highly demanded photographers.

David LaChapelle’s career in fashion photography was first launched at the tender age of 17 by NYC art legend Andy Warhol, who gave the budding visual maverick his big break by helping him secure a job working for Interview magazine during the ’80s.

Since then, LaChapelle has achieved unprecedented success, continuing to blur the lines between what is considered advertising, fashion and fine art with a hyper- saturated, Alice in Wonderland-like aesthetic. A provocateur at heart, LaChapelle’s work is inspired by everything from art history and religion, to surrealism and street culture, all while transcending the material world with brazen and sometimes perverted social
commentary.

A prolific visionary whose sadistic vision oozes pitch- black sexuality, Steven Klein conjures up images that offer punishing takes on pop culture as well as the artists that inhabit it; including everyone from Madonna and Rihanna to Brad Pitt and Lady GaGa. His subjects are often set in a place that offer a sinister, seductive and foreboding aura which isolate emotion and warmth, delving instead into the most frigid corners of human sentiment. Klein often injects themes of submission, homoeroticism and gender role reversal in his work as a means to put the stereotypes of celebrity and fashion down on its knees.

After rising to prominence as a fine art photographer during the ’70s, Japan’s Nobuyoshi Araki has made a significant imprint in the realm of controversial image makers. Fusing Japanese cultural heritage and history with distorted, BDSM-influenced representations of female eroticism, Araki’s work starkly challenges conservative social norms; especially those of his native country.

Bill Henson is an Australian photographic artist who has exhibited nationally and internationally in galleries such as the Solomon R. Guggenheim Museum in New York, the Venice Biennale, the National Gallery of Victoria in Melbourne, Australia, the Art Gallery of New South Wales in Sydney, Australia and the Bibliothèque Nationale in Paris.

On the opening night of Bill Henson’s 2007–2008 exhibition at the Roslyn Oxley9 Gallery in Paddington, Sydney, was cancelled after eight individual complaints were made to Police voicing concerns about an email invitation from the Gallery to a “Private View” that depicted photographs of a nude 13-year-old girl. Hetty Johnston, a child protection advocate also lodged a complaint with the New South Wales police. In the process of removing the images from the Gallery, Police found more photographs of naked children on exhibition among various large format photographs of nonfigurative subjects, which they later sought to examine for the purposes of determining their legal status under the NSW Crimes Act and child protection legislation. Following discussions with the Gallery and a decision by Henson, the Gallery cancelled the opening and postponed the show.

The situation provoked a national debate on censorship. In a televised interview, Prime Minister Kevin Rudd stated that he found the images “absolutely revolting”and that they had “no artistic merit”. These views swiftly drew censure from members of the ‘creative stream’ who attended the recent 2020 Summit convened by Rudd, led by actor Cate Blanchett.

Oliviero Toscani’s sobering campaigns for Benetton throughout the ’80s and ’90s catapulted the little-known Italian brand to global status, melding social commentary and commerce in a way that transfigured the role and power of advertising in modern times. The notorious ads, which featured subjects ranging from dying AIDS patients to clergy members engaging in carnal acts, faced countless governmental bans and public protests, all while increasing awareness on prominent issues such as racism, capital punishment, gay rights and war.

In 2005, Toscani shook up conservatives with a homosexual-themed campaign for men’s clothing brand Ra-Re; as well as in 2007, when he snapped a campaign for clothing brand Nolita that provided a shocking look at fashion’s ever-plaguing issue of anorexia. “There isn’t such a thing as a shocking picture,” he once told CNN, “there is shocking reality that is being reproduced through photography to the people who aren’t there.”

With an ethos that is wholeheartedly anti-fashion, Juergen Teller’s no-holds-barred approach to photography smudges the lines between art and advertising. His reinvention of fashion photography began to develop in 1996, when he famously photographed a naked Kristen McMenamy for the front cover of Süddeutsche Zeitung magazine with the word “Versace” scrawled across her chest in red lipstick. Noted for his refusal to keep even his most lucrative fashion campaigns – which includes longtime collaborations with top-tier houses such as Marc Jacobs, Celine, Yves Saint Laurent and Vivienne Westwood – distinct from his most intimate, non-commissioned images, Teller strikes a rare balance between creativity and commercialism through strongly unglamorous shots which coax model and celebrity subjects out of their comfort zones. Emphasizing rawness and imperfection over artificiality and glossiness, Teller, who works almost exclusively in color and often employs a high-speed flash and a Contax G2 camera, doesn’t try to flatter but to be “true,” as he puts it himself.

10. Larry Clark
Larry Clark’s work has drawn criticism for years; before delving into the world of filmmaking, Clark was routinely called out for sleazy themes running through his photography; some even calling his work child- pornographic. Turning raw shots into his first iconic book Tulsa in 1971, Clark was one of the first to lay his subjects bare; bringing true meaning to the word raw. Clark’s work has seen him collaborate with some major labels, including J.W. Anderson and (most notably) Supreme, who celebrated the 20th Anniversary of his 1996 cult classic Kids with a capsule collection featuring printed stills from the film. His graphic and incessant depiction of disenfranchised youth has famed him as one of the most compelling photographers of his time and continues to cement his reputation as one of the industry’s most unapologetic visionaries. 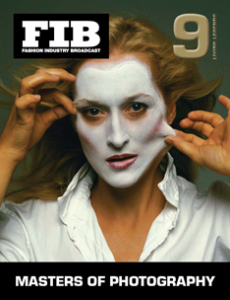 Plus discover more about these photographers in FIB’s “Masters of Photography” Vol. 9, 10, 12 & 50 “Living Legends”. Available on Amazon worldwide.