Regarded as the most prestigious nights of fashion in the world, Anna Wintour has graciously granted us a second Met Gala in less than eight months! It’s a night full of red carpet looks that stop the nation. Here’s a little insight into the ‘Gilded Glamour’ that has us completely enthralled.

Gold, glitter, and glamour, are the elements that always make a return to the Met, but this year’s theme, ‘Gilded Glamour’ has us wondering if we’ll see the cast of ‘Bridgerton’ turn up. Well, Simone Ashley really did Gilded Glamour proud as she made a major statement in a Moschino gold metallic bustier.

Anyway, the puff-sleeved silhouettes, corsetted outfits, long opera gloves, pearls and more jewels than ever have left us speculating if Regencycore, the 18th-century-inspired fashion trend is back. And with the chokehold, the romance drama television series has, it wouldn’t be all surprising.

The pop-culture stratosphere has seen the launch of the timeless trend, which has actually lingered for decades and brands like Vivienne Westwood have reawakened the iconic fashion.

So What Does This Mean For The Met?

Well, the exhibition title, conceived by Wendy Yu, Curator in Charge of the Costume Insitute has a strong purpose. Namely, “In America: An Anthology of Fashion” was born to showcase the creativity of American dressmakers and designers. To reconstruct the narrative of American fashion within it. Andrew Bolton is a longtime Curator of the Metropolitan Museum of Arts Costume Institute. He relates each room to a distinct short film that each adds up to a feature film with interconnected stories.

“Ultimately, the aim of the exhibition is to offer a more nuanced and less monolithic reading of fashion,”

The Costume Institute made a specific mention that invite-only celebrities and esteemed guests are to embody the grandeur of Gilded Age New York. And in case you missed it, for men, this also means white tie only.

Dr Jill Biden, who made a surprise appearance at a press preview for the Costumes Institute, voiced her thoughts.

“The history of American design is rich and deep; it is a story of innovation and ingenuity, of rebellion and renewal,”. It has often been written by those in the shadows, not recognized for their influence and art, but here at The Met their stories are told. Their voices are raised and their work can shine,”

If you haven’t already realised, the Met isn’t what it used to be. It’s turned into a social media send-off. Some influencers and celebs are parading nothing other than just downright shocking stuff! Here’s a glimpse into the fashion we hope we’ll never see again. Fair warning, it’s disappointing.

Sorry, Tommy, there isn’t too much good to say about this one. Although the dress is far from on point, her minaudière says “Protect Trans Kids” which is clearly the highlight and we do love that!

Vanessa did an absolutely wonderful job as co-host for the 2022 Met, but it’s a shame her outfit didn’t live up to the expectations. Some of us love it, some of us don’t. But we all know it’s been done before and frankly, it’s just not giving Gilded Glamour. However, hair and makeup are a winner. Credit where it’s due, right?

Well, other than a big fat no. I’m not sure what else to say? The design of the top is giving fast fashion Shein and the flowers in the hair and dress are just not hitting the floral agenda. Camilla, we hate to say it, but it’s giving arts and crafts.

Moving on to the Good Stuff- FIB’s TOP 3

Now for Naomi, it wasn’t just the choice of a black Burberry dress but the accessorised, $6.6 million Jacob & Co necklace. Insane! Unfortunately, it was partially hidden? Anyway, that wasn’t all that made our senses tingle. The iconic face jewels perfectly epitomised the Gilded Glamour of the Met. Naomi, you never fail to turn heads.

You might take a quick look at Hoyeon’s choice of garments and not think much of it. In reality, you should read about it first. Because the Louis Vuitton mini dress and sheer makeup the Squid Game superstar and model exhibited are straight from an Oil Painting. Literally! Her entire look was inspired by the works of John Singer Sargent and Robert Henri. Now that is cool!

“I wanted Hoyeon to look as if she had a portrait painted during the Gilded Age,” makeup artist, Nina Park said.

This one certainly left a mark and it undeniably was the best kind of mark. Laura Harrier, you are incredible! The actress and model really showed us how it’s done. A prime example of simplicity and also hitting the nail on the Gilded Glamour head (a figure of speech of course). The H&M custom dress, yes you heard correct, well it was always going to happen. For Harrier, her connection to H&M as a brand is really quite special. Keep doing you, Laura!

“Obviously H&M isn’t officially an American company, I feel very connected to it. I think for me, as a teenager growing up, that’s all I wore and it’s always the best thing that is accessible… so it feels like this really nice, marrying of classic Americana with the most high-end fashion.”

So good we must honour it twice. Gen-Z’s it-girl claimed her tiara at the Met this year, just as Anna Wintour did. She’s on a winning streak after her jaw-dropping 2021 look. So it’s no surprise that the young social media personality unveiled her puffed sleeves, soft, train skirt, cool blonde bob and big yellow and white diamonds in style. 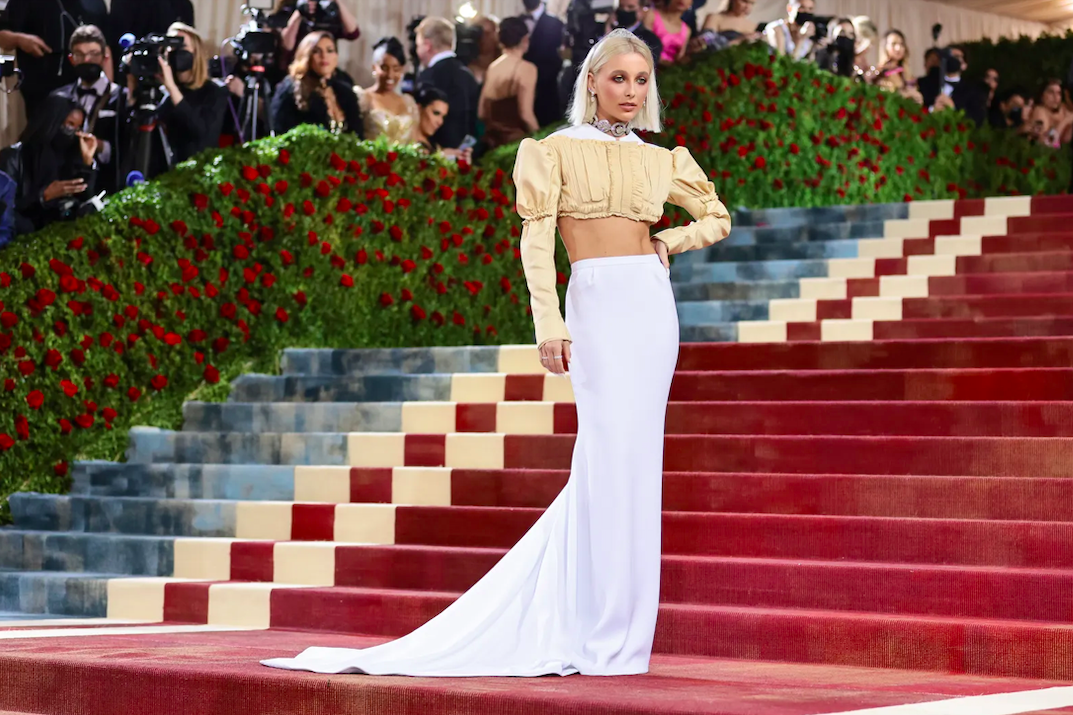 There is no question that Billie perfectly embodied the Met theme with romantic frilled hems and bosom-boasting silhouettes. Her punk adaption of Gilded Glamour is all we fashion fiends really desired. But the best part about it, well, the whimsical detailing and floral arrangements of the custom Gucci dress were entirely upcycled! A thrifting queen and a true standout!

I am speechless. Normani blew everyone away with her two-piece ensemble. The high neck and period-piece hat complete her elevated, bubbly look. I would say the layered, inflated design looks like it could be inspired by Yoshio Kubo’s avant-garde designs. But we must also praise designer Christian Siriano. In the end, it really was Normani.

The royal blue train met with detailed floral embroidery was a showstopper and Taylor Hill expertly advanced in the gorgeous Miss Sohee design. The gown stretched across quite a few stairs, so we hope it didn’t leave with any footprints! To top it off, the look really united well with matching satin thigh-high boots

Finally, Bella, a look I’m still not sold on, but it is Bella Hadid and I want to talk about it. The sultry leather gives Catwoman, yet the glamorous lace reassures Gilded Glamour. Even more so the Grecian partial updo and Briony Raymond pearl anklet award us a sense of stunning nostalgia.

Now we couldn’t just forget Sophie Turner and Joe Jonas. I think you can all agree it was the baby bump and the connection between the two that made our hearts flutter. Not to mention Sophie absolutely flaunted her baby bump in an elegant Louis Vuitton gown. Joe also wore Vuitton, just not as well.

Blake Lively, as co-chair of the highly anticipated 2022 Met Gala only had one shot to stun us all and that she did! Although it wasn’t without the aid of a handful of red carpet helpers, Blake did indeed beautifully transform in the Atelier Versace gown. According to Marie Claire, “the dress was a homage to New York City”.

Blake Lively’s dress is unveiled at the 2022 #MetGala pic.twitter.com/ebpz2RWBwO

Some more of our favourites are featured below because we just couldn’t choose!